A Year of Not Forgetting the Roundabouts

Exactly a year ago (January 1st 2013), and with some trepidation, I launched my blog, Don’t Forget the Roundabouts.  I recently wrote about why I joined Twitter, https://simonleather.wordpress.com/2013/12/18/why-i-joined-the-twitterati-blogs-tweets-talks-making-entomology-visible/ and concluded that it had been a worthwhile and educational experience.  So how about the blog?  To me this was even scarier than going on to Twitter.  It took me some time to come up with a title, and I finally opted for the one you see above this post.  This celebrates my interest in urban ecology, my fascination with the architecture, decoration and biodiversity of roundabouts in general 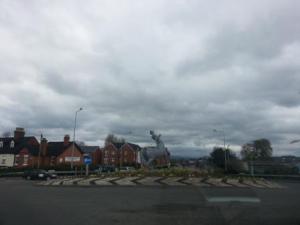 and my belief that we should concentrate the majority of our conservation efforts on small and local issues in our own back-yards https://simonleather.wordpress.com/2013/02/01/think-small-and-local-focus-on-large-charismatic-mega-fauna-threatens-conservation-efforts/.  I am not saying that international conservation is a bad thing; I just think that there is a lot of scientific imperialism/colonialism (e.g.  http://www.bmj.com/content/331/7519/705.full, andhttp://www.conservationandsociety.org/article.asp?issn=0972-4923;year=2007;volume=5;issue=2;spage=147;epage=183;aulast=Adams ) out there as well as a huge amount of taxonomic bias, driven by ex-situ conservationists with agendas driven by charismatic mega-fauna.  I think that local conservationists and indigenous populations should be primarily responsible for their own conservation efforts, but also of course, not forgetting their global responsibilities.

Writing a fully fledged blog, as opposed to tweeting, is to me a big deal.  Twitter is pretty ephemeral but a personal blog is out there and relatively easy to find.  I have therefore felt that when I write about science, which is mainly what appears here, that I need to research the literature thoroughly and get my facts right. After all, what I write about aphids may be found by a researcher or student who because I have published extensively on aphids, may take it as gospel without checking sources, despite my warnings https://simonleather.wordpress.com/2013/03/28/how-stephen-jay-gould-wrote-macbeth-not-giving-credit-where-its-due-lazy-referencing-and-ignoring-precedence/.  I find that preparing a scientific post takes as much background research as writing a full-blown paper for publication, in fact sometimes it takes longer because I find myself delving into some really obscure literature from the distant past https://simonleather.wordpress.com/2013/06/06/desperately-seeking-sources-the-quest-for-the-original-citation/. That said, it has all been great fun and I have learnt a lot and found a lot of really interesting blogs out there; something I never really looked at until I started blogging myself.

So what have I learnt from blogging?  Well, not everyone finds aphids as interesting as I do, but I will continue to plug away at trying to convince you all that aphids really are the greatest insect group in the world 😉  That said, my most popular post was about aphids, https://simonleather.wordpress.com/2013/06/06/desperately-seeking-sources-the-quest-for-the-original-citation/ found mainly by people using the search term, ‘do aphids bite people’ and looking at the traffic data it shows a fairly good correlation with the times that aphids are likely to be most abundant, although I am not convinced that they are all out there biting people.

Otherwise my most popular posts are those that have dealt with more general issues, such as the PhD viva experience https://simonleather.wordpress.com/2013/05/07/are-phd-examiners-really-ogres/ which shows a steady number of hits at about an average of one a day once you discount the initial launch peak. 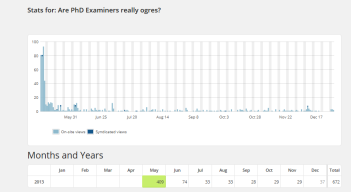 I have published 39 posts, reached people in 112 countries, with the top ten being dominated by the English-speaking countries of the world, and 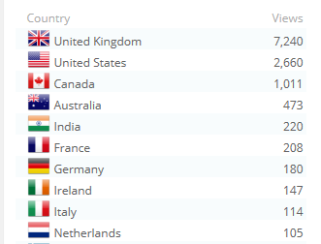 had over 14,000 views with an average of 39 per day and sixty people subscribe to my blog as official followers.

My most viewed day was 451, won by my recent blog on joining the Twitterati.  My ambition is to have a post that is actually read by all my followers on Twitter!  My two most frequent commenters and bestowers of likes are Emily Heath http://adventuresinbeeland.com/ and Jeff Ollerton http://jeffollerton.wordpress.com/.   My most frequent referrer was Chris Buddle http://arthropodecology.com/

My thanks and best wishes to them all, and of course, to all my other readers and followers.  I would really like feedback from all of you to help me improve my efforts during 2014.

A Prosperous and Happy New Year to you all.

4 responses to “A Year of Not Forgetting the Roundabouts”