When frustration becomes serendipitous – My second most cited paper

For most of the 1980s and the early 1990s I worked for the UK Forestry Commission as a research and advisory entomologist. As a civil servant I was subjected to a lot more rules than I am now as a university academic. The most frustrating set of rules in my mind, were those associated with publishing papers. The initial consultation with a statistician before your experiment was planned and any subsequent collaboration with the analysis was very sensible, and I had no problems with that part of the process at all. Our statisticians were very good in that they helped you decide the analysis but expected you to learn GenStat (the Forestry Commission standard statistics programme) and do it yourself unless you were really stuck.

The next bit was the frustrating part. When it came to writing papers you first submitted your paper to your line manager. They then read your paper, very frustrating indeed for me, as my immediate boss considered papers a very low priority and it could be several months before he got around to passing it back with comments and suggestions. Then it was passed to a member of one of the other department such as silviculture, tree breeding or pathology for them to read and make comments. The idea behind this being that it helped make the paper accessible to a wide audience, again a good idea. The problem at this stage was that once again your paper was likely to be a low priority, so yet more delay. Once that was done you then had to submit your paper to the Chief Research Office for him to read and comment on, so once again yet more delay. This meant that quite often it was a year before you actually were able to submit your paper to a journal, which could be deeply frustrating to say the least. 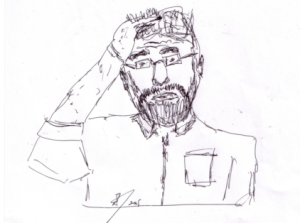 In 1986 a new journal to be published by the British Ecological Society was announced, Functional Ecology. In those days, the dreaded Impact Factors had not yet raised their ugly heads, and one tended to publish in journals relevant to your discipline, or, as in this case, the fancy took you.  I thought it would be cool to publish in the first issue of the first volume of this new journal.  I therefore set to work, with the help of one of our statisticians to produce a paper about life history parameters of the pine beauty moth, from a more ecological point of view and not from the more applied view-point of it as a forest pest (my job remit). I was very proud of the paper and confess to having got somewhat carried away in the discussion, so much so, that it was suggested by all who read it in the very lengthy internal appraisal process, that most of the discussion should be cut as being too far away from the main story. As the process had taken so long already I decided to go with the flow and eventually submitted my paper about a year after first writing it, incidentally giving my statistician a co-authorship. It was accepted and did indeed appear in the first volume of Functional Ecology, albeit the last of the year (Leather & Burnand, 1987)! It has to date (14th October 2015) being cited 53 times, by no means a disgrace, but certainly not my second-most cited paper.

I mentioned earlier that I was really proud of my discussion and I decided that I was going to publish it regardless. I reworked it slightly and submitted it to Oikos as a Forum piece, taking the calculated risk of not submitting it through the official Forestry Commission system. My reasoning was, that a), it was unlikely to be read by anyone in the Forestry Commission, being a very ecological journal, and b), if challenged I would say that it had already been seen by the powers that be, albeit not officially. To my relief it was accepted as is (Leather, 1988) and my immediate boss never mentioned it. To my surprise and delight this is now my second-most cited paper, having so far acquired 207 citations and still picks up a reasonable number of cites every year. I guess that I should actually be grateful to all those internal referees who insisted that I cut my discussion down so drastically.

In case you wondered, my most cited paper is an Annual Review paper, written with one of my former PhD students, Caroline Awmack, and now has almost a thousand citations (994 as of today).