A couple of weeks ago (11-12 February), I had the privilege and honour to attend the latest in the excellent series of Royal Entomological Society Postgraduate Forums, this year held at Harper Adams University (HAU) and organised by Claire Blowers and Jordan Ryder, both of whom are PhD students at HAU. Although the Royal Entomological Society (RES) is sometimes still thought of as being a somewhat stuffy and traditional learned society, compared with, for example, the British Ecological Society, which had student membership rates long before the RES, it has in some student-related areas, led the way, the Postgraduate Forums being a great example. The RES ran the first PG Forum in, as far as I can tell, 2000, although their reports are only published from 2007 onwards. The PG Forums are run by postgraduate students and the idea is to give PhD and MSc students the opportunity to present their work to their own community. A few more established entomologists are usually invited as keynote speakers to address topics that are of particular interest to the organising committee, and hopefully, give delegates useful advice and/or examples of how an entomological career might develop. If I remember correctly I was one of the first ‘more established entomologists’ guest speakers.   I think I spoke about how to get published without being too traumatised by the experience. I was asked back a few years later (2008) and spoke about the future of entomology as a discipline, with a somewhat pessimistic title, despite which my conclusion was 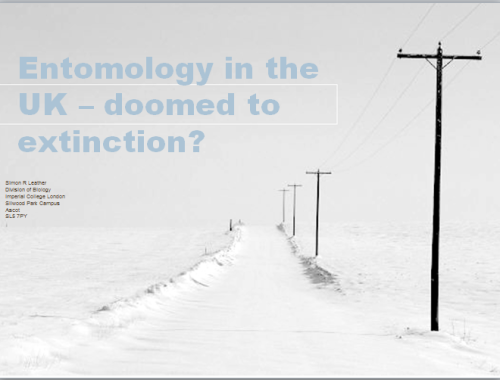 decidedly upbeat, although my optimism about NERC was not borne out as they managed to fund the 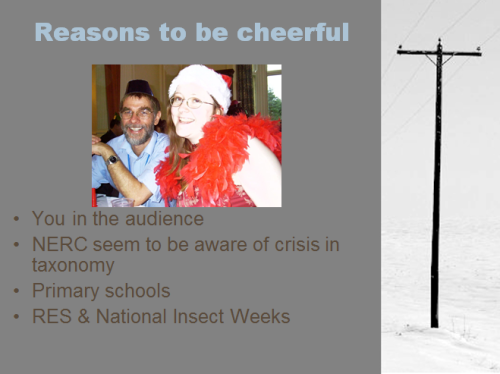 the wrong sort of taxonomy.

This time I was asked to talk about applied entomology, so decided to base the talk on my own career as I felt this would give the audience a flavour of what they might expect and also of course the opportunity to laugh at the long-haired 1970s version of me and to

recall my introduction to the concept of Integrated Pest Management (and of course aphids).

I also highlighted the huge changes that have happened in the technology surrounding paper writing since I wrote my first paper in 1979. 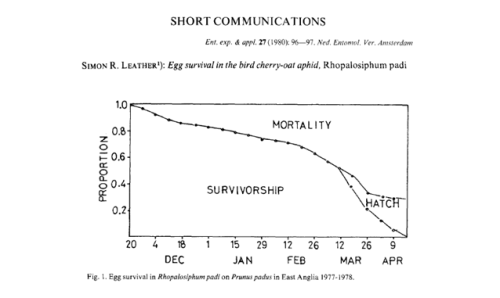 Our figures were drawn using graph paper, tracing paper, Rotring pens, Indian ink and, if you did not have LetraSet© using a stencil. 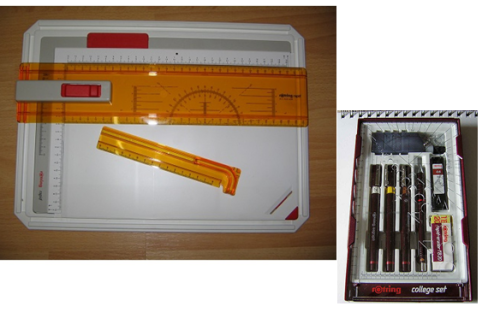 My overall message was that you shouldn’t feel constrained by the subject of your PhD, many opportunities are open to you and being a university academic is not the only way to have an enjoyable career in entomology, as Richard Greatrex (Syngenta Bioline), Simon Carpenter (Pirbright) and Sarah Beynon (Dr Beynon’s BugFarm) pointed out, and most importantly, never forget team work and collaboration make life so much easier and productive. 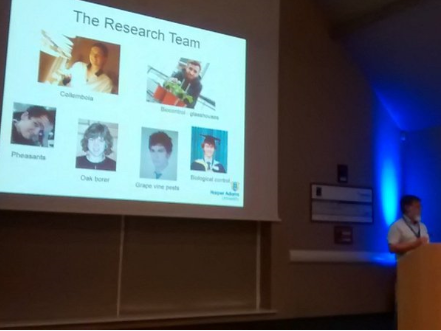 Always give credit where it is due.

Sarah Beynon gave a hugely entertaining talk, I was so pleased that I had gone before her, as otherwise I would have felt very inadequate 🙂 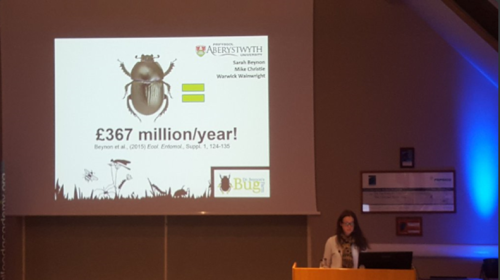 Amoret Whitaker spoke about her career in forensic entomology 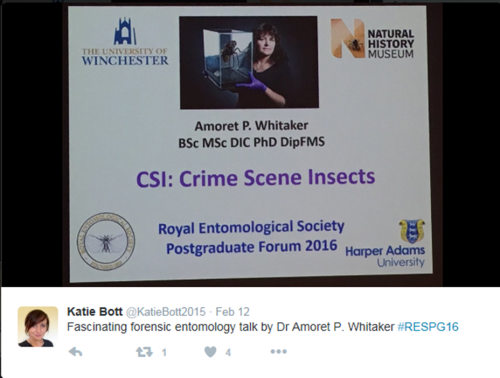 and the conference concluded with a brief presentation by Luke Tilley the Outreach Officer for the Royal Entomological Society.

Most importantly of course were the next generation of entomologists, who gave excellent talks and produced some great posters. Unfortunately I had other appointments on the second day so missed some of the talks but I was able to see the winning talk by Dave Stanford-Beale about his experiences in Honduras collecting Saturnid moths for his MSc project.  Incidentally, Dave successfully completed the MSc in Entomology at Harper Adams University in September 2015. 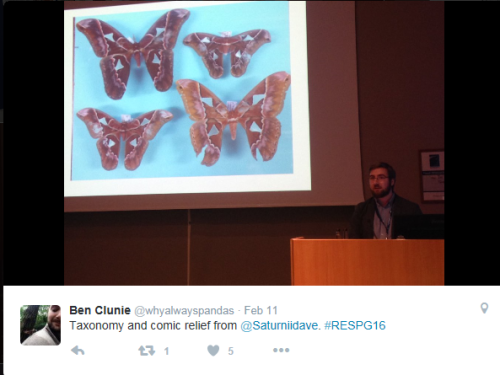 There were some excellent posters, all were very good, and it was great to see some of my former MSc students again. 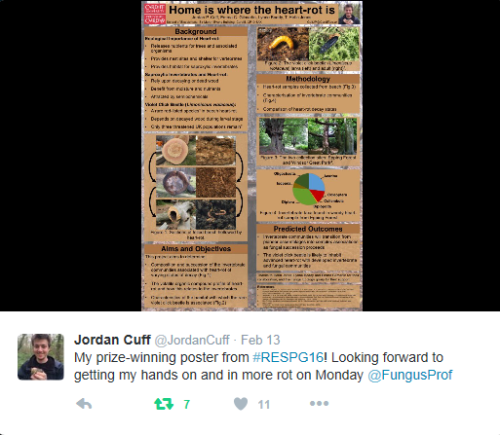 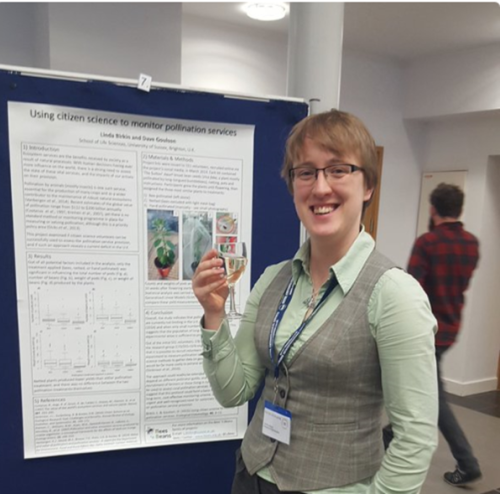 The social side of things is always important and we enjoyed a superb conference dinner with an accompanying entomological quiz; won by the younger generation rather than us ‘old timers’ :-), which also gave the contestants the chance to use their imagination in devising team names. 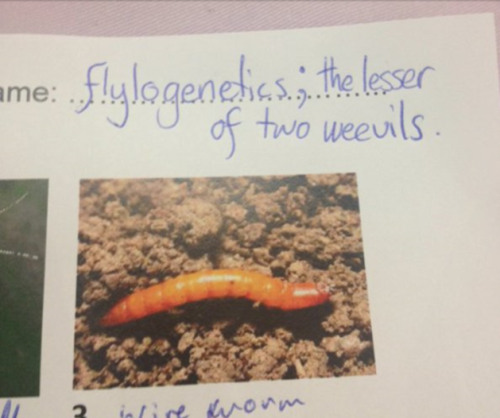 The winning team and their entomological prizes

On the evidence of the two days, the excellence of the oral presentations and the subject matter and high standard of presentation of the posters, I am confident that the future of UK entomology is in good hands. Well done all of you and especially to Jordan and Claire for volunteering to take on the responsibility for organising the event.  I also think that we should tank Scott Dwyer, currently on the MSc Entomology course, but heading off to Warwick University to do a PhD in October, who has volunteered to host next year’s event.

And many thanks to all those delegates who posted pictures on Twitter, which allowed me to record this event with more, and better photographs, than I managed to take.