Ideas I had and never followed up

“When I was younger, so much younger than before” I never needed any help to come up with ideas for research topics or papers.   When I was doing my PhD and later as a post-doc, I used to keep a note pad next to my bed so that when I woke up in the middle of night with an idea (which I often did) I could scribble it down and go back to sleep.  (These days sadly, it is my bladder and not ideas that wake me up in the wee small hours 🙂*)

On waking up properly, these ideas, if they still seemed sensible, would  move onto Stage 2, the literature search.  In those days, this was much more difficult than it is now, no Google Scholar or Web of Science then, instead you had to wade though the many hard-copy Abstract series and then get hard copies of the papers of interest.  Once in my hands, either via Inter-library loans or direct from the author, or even photocopied from the journal issue (we did have photocopiers in those days), the papers would be shoved into a handy see-through plastic folder (Stage 3).  Depending on how enthusiastic I was about the idea, I would then either mock-up a paper title page or put the folder in the ‘to deal with later’ pile (Stage 4).   Many of these eventually led on to Stage 5, experiments and published papers.  Others have languished in their folders for twenty or thirty years.

As part of my phased run up to retirement (2021), I have started farming out my long-term publishable (hopefully) data-sets to younger, more statistically astute colleagues and ‘publishing’ less robust, but possibly useful data on my blog site.  I have also, somewhat halfheartedly since the task is monumental, started to go through my old field and lab books that 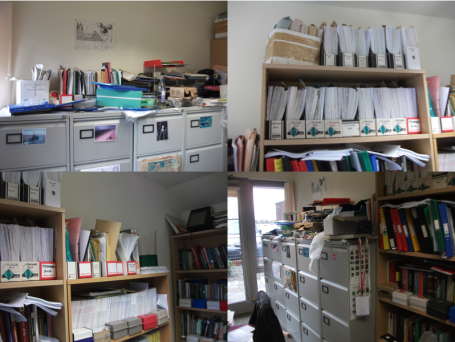 A monumental collection of data.  The top right picture is my 20-year sycamore data set.  I estimate that there are about 7 million data points in it; of which to date only 1.6 million, give or take a million, are computerised.  I also have a ten-year bird cherry aphid data set from Scotland, waiting to go on the computer, any volunteers?

are not yet computerised.  Whilst doing this I came across some Stage 3 folders, which as you can see from the colour of the paper have languished for some time. 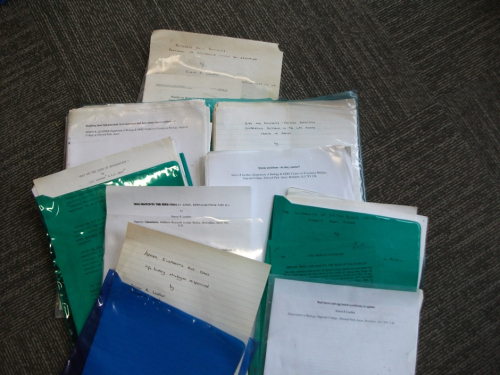 There were nine forgotten/dismissed proto-papers, the oldest of which, judging by the browning of the paper and my corresponding address, dates from the early 1980s, and is simply titled “What are the costs of reproduction?”.  This appears to have been inspired by a talk given by Graham Bell at a British Ecological Society, Mathematical Ecology Group meeting in 1983.  In case you are wondering, this was one of those meetings supposed to bring theorists and empiricists together.   It didn’t work, neither group felt able to talk to each other 🙂  The idea, inevitably based on aphid data, didn’t bear any fruit, although I do have this graph as a souvenir.  If anyone wants 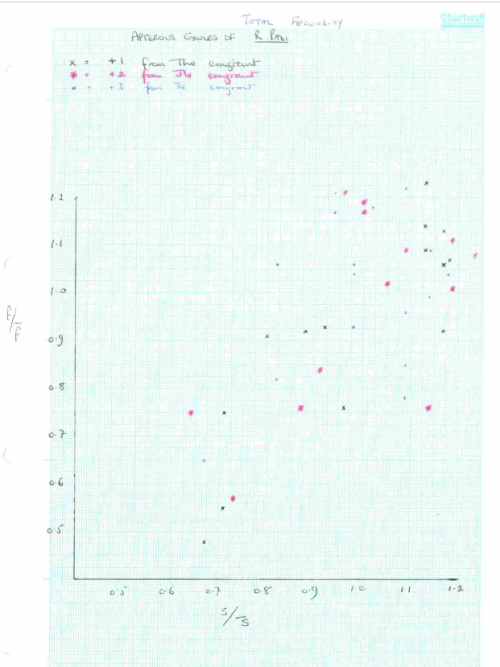 In those days we used graph paper 🙂

the data, do let me know.

Slightly later, we find the grandly titled, “Size and phylogeny – factors affecting covariation in the life history traits of aphids”.  This had apparently been worked up from an earlier version of a paper, less grandly, but no less ponderously, titled, “Size and weight: factors affecting the level of reproductive investment in aphids”.  This is based on some basic dissection data from eight aphid species and presents the relationships, or lack of, between adult weight (or surrogate measure), ovariole number, potential fecundity and the number of pigmented embryos.  As far as I can remember these are data that Paul Wellings** and I collected as a follow-up to work we had published from a side project when we were doing our PhDs at the University of East Anglia (Wellings et al., 1980).  The second title was inspired by a paper by Stephen Stearns (Stearns, 1984), who was something of a hero of mine at the time, and was, I guess, an attempt to publish pretty simple data somewhere classier than it deserved 🙂  So this one seems to be a Stage 4, almost Stage 5 idea, and may, if I have time or someone volunteers, actually get published, although I suspect it may only make it to a very minor journal under its original title.

Then we have a real oddity, “Aphids, elephants and oaks: life history strategies re-examined”.  This one as far as I remember, is based on an idea that I had about r- and k-selection being looked at from a human point of view and not the organism’s point of view.  My thesis was that an oak tree was actually r-selected as over its life-time it was more fecund than an aphid 🙂  I suspect this was going to be aimed at the Forum section of Oikos.

The next one, dates from the late-1980s, “Protandry versus protogyny: patterns of occurrence within the Lepidoptera”, and reflects the fact that females of the pine beauty moth, Panolis flammea, on which I was then working, emerge before the males (Leather & Barbour, 1983; Leather, 1984), something not often reported in Lepidoptera.  I wondered what advantage (if any) this gave P. flammea.  I planned this one as a review or forum type paper but never got beyond the title and collecting two references (Robertson, 1987; Zonneveld & Metz, 1991).  I still think this is an interesting idea, but do feel free to have a go yourselves, as again, I suspect that I won’t actually get round to it.

Finishing off my time in Scotland, is a paper simply entitled, “Egg hatch in the bird cherry aphid, Rhopalosiphum padi.” I have ten years of egg hatch data from eight trees waiting to be analysed.  This is almost certainly not worth more than a short note unless I (or a willing volunteer) tie it in with the ten years data on spring and autumn populations on the same trees 🙂 Aphid egg data although not very abundant, is probably not in great demand.  My first published paper (Leather, 1980) was about egg mortality in the bird cherry aphid and 36 years later has only managed to accrue 32 citations, so I guess not an area where one is likely to become famous 🙂

I then have four papers dating from my time as an Associate Member of the NERC Centre for Population Biology at Silwood Park.   The first is titled, “The suitability of British Prunus species as insect host plants” and was definitely inspired by my foray into counting host plant dots as exemplified by the late great Richard Southwood (Leather, 1985, 1986).  I think I was going to look at palatability measures of some sort.

The next is called ‘Realising their full potential: is it important and how many insects achieve it?”  I’m guessing that this was a sort of follow-up to my second most-cited paper ever (Leather, 1988), the story of which you can read here, if at all interested.  Most insects, even those that are pests, die before achieving anywhere near their full reproductive potential, but then so do we humans, and our population continues to grow.  So in answer to the question, I guess not and no it doesn’t matter 🙂

Also linked to insect reproduction is the next paper, which I have followed up with the help of a PhD student, and do hope to submit in the near future, “Queue positions, do they matter”.  As this one may actually see the light of day, I won’t say anything further about it.

And finally, another one about aphid eggs, “Bud burst and egg hatch synchrony in aphids”.  This one was going to be based on my then ten-year sycamore aphid data but is now based on my twenty-year data set and is now in the very capable hands of a PhD student and hopefully will see the light of day next year.

There are also a number of other folders with no titles that are just full of collections of reprints.  I can only guess at what these ideas were so won’t burden you with them.

I mentioned at the beginning of this piece that I don’t wake up in the middle of the night with ideas any more.  As we get older I think there is a tendency to worry that we might run out of ideas, especially when, as we do in the UK, suffer from ludicrously underfunded research councils with very high rejection rates that don’t allow you to resubmit failed grant applications.  It was thus reassuring to see this recent paper that suggests that all is not lost after you hit the grand old age of 30.  That said, I do believe that as you move away from the bench or field, the opportunity to be struck by what you see, does inevitably reduce.  As a PhD student and post-doc you are busy doing whatever it is you do, in my case as an ecological entomologist, counting things, and inevitably you see other things going on within and around your study system, that spark off other ideas.  It was the fear of losing these opportunities as I moved up the academic ladder, which inevitably means, less field and bench time and more time writing grant applications and sitting on committees, that I specifically set aside Monday mornings (very early mornings) to my bird cherry plots and even earlier Thursday mornings to survey my sycamore trees.   Without those sacrosanct mornings I am pretty certain I would have totally lost sight of what is humanly possible to do as a PhD student or post-doc.  This, thankfully for my research group, means that I had, and have, realistic expectations of what their output should be, thus reducing stress levels all round.   As a side benefit I got to go out in the fresh air at least twice a week and do some exercise and at the same time see the wonderful things that were going on around and about my study areas and as a bonus had the chance to get some new ideas.

Leather, S.R. (1985) Does the bird cherry have its ‘fair share’ of insect pests ? An appraisal of the species-area relationships of the phytophagous insects associated with British Prunus species. Ecological Entomology, 10, 43-56.

Stearns, S.C. (1984) The effects of size and phylogeny on patterns of covariation inthe life history traits of lizards and snakes. American Naturalist, 123, 56-72.

*I hasten to add that I do still have new ideas, they just don’t seem to wake me up any more 🙂

**Now Vice-Chancellor of the University of Wollongong

4 responses to “Ideas I had and never followed up”