A Roundabout Review of the Year – highlights from 2016

Welcome to my traditional, well it is the fourth after all, annual review of my social media and science communication activities.  I have had another enjoyable year blogging and tweeting, and as I wrote last year, I have absolutely no plans to stop either.   You may also be pleased to know that pictures of roundabouts will continue to appear at irregular intervals 🙂

Roundabout on the edge of Prades, 2016, complete with the author 🙂

I have continued to post at about ten-day intervals; this is my 142nd post.  The more I write the easier it seems to become. I also did my first jointly authored post, teaming up with Anne Hilborn (@AnneWHilborn) to ask if naming study animals introduced observational bias which generated a fair bit of interest and was published in a slightly modified form in the on-line magazine Biosphere.  Another of my blog articles was converted into a discussion piece for the journal Agricultural & Forest Entomology  (see February 2017 issue) and my blogging activities resulted in me being asked to do an article about roundabouts and their biodiversity for the summer newsletter of the International Association for Landscape Ecology.  For those of you who think that social media has no place in science, I feel that this is pretty convincing evidence that science communication via social media is a  very worthwhile use of our time. 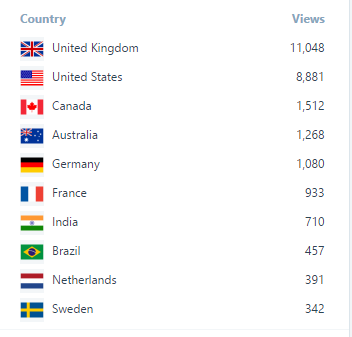 The top ten countries for views in 2016

came form the UK and USA, although Sweden and The Netherlands made it into the top ten, pushing Spain into the wilderness.

My top post (excluding my home page) in 2016 was one of my entomological classics, the Moericke Trap, closely followed by  A Winter’s Tale – Aphid Overwintering,  although my all-time winner is still Not All Aphids are Vegans with over 5 000 views.  My top ten posts tend to be either about aphids or entomological techniques/equipment which I guess means that I am filling an entomological niche.  I was however, disappointed to see that one of my favourite posts about (to me at any rate) the inspirational paper by Mike Way and Mike Cammell on using aphid egg counts to predict crop damage is languishing in the bottom ten, despite being published in September 2015 😦

One of the things that I find somewhat frustrating with blogging is the difficulty of gathering comparative data.  It may be the scientist in me or perhaps I am just too competitive, but as WordPress kindly supply their users with personal statistics, I feel the need to know how others are doing.  It is surprisingly hard to get these sort of data although this site is useful if you are hoping to use your blog for generating an income.  I was very excited a few weeks ago when my blog reached over 100 000 views at beginning of December.  Just a few days later Dynamic Ecology announced their 1 00 000 unique visitor which certainly put me in my place!   They have, however, been around a while and post much more frequently than I do, so are perhaps not the best yardstick, although of course something to aspire to.  Luckily, Jeff Ollerton who has been blogging about a year longer than me and in a similar subject area, is as obsessed with blogging statistics as I am and very kindly gave me access to his data.  Looking at the data it seems that we arrived at the same point

Comparative statistics between my blog and that of Jeff Ollerton’s Biodiversity Blog.

after the same amount of time but in different ways.  Jeff had a much slower start than me and his stats are best described using a curvilinear relationship whereas my line is still a straightforward linear relationship.  I guess that as I was on Twitter when I launched my blog that I immediately picked up more views than Jeff who only joined the Twitter fraternity a month or so ago.  It will be interesting to see if his readership curve steepens in the coming months and if mine continues to rise linearly, plateau or (hopefully) take-off as Jeff’s did.

In terms of Tweeting I had a really great experience curating the Real Scientists Twitter account @realscientists.  It kept me very busy but I interacted with a whole new set of people and had some really interesting conversations.  I can heartily recommend it to anyone who is considering volunteering.  I had hoped to hit the 5 000 follower milestone before the end of the year but didn’t quite make it, ending the year with 4 960 instead which is according to my children, pretty good for a normal person 🙂

Many thanks to all my readers and especially to those who take the time to comment as well as pressing the like button.  My top commenters, as indeed they were last year, were Emma Maund, Emily Scott, Emma Bridges, Jeff Ollerton, Amelia from A French Garden and Philip Strange.  I look forward to interacting with you all in 2017.  A Happy and Prosperous New Year to you all.

Filed under Roundabouts and more, Uncategorized