Last week  (13th February) I traveled with the MSc Entomology students to the Natural History Museum, London.  As part of their course they are taken behind the scenes and meet some of the curators and their favourite beasts.  This one of my favourite course trips and although I have made the pilgrimage for many years I always find something new to marvel at as well as reacquainting myself with some of my old favourites.  After an early start (0645) we arrived exactly on time (for a change), 10.30, at the Museum site in South Kensington.  I always have mixed feelings about South Kensington, having spent twenty years of my life commuting to Imperial College, just up the road from the museum.  I loved teaching on the Applied Ecology course I ran, but over the years the working atmosphere in the Department became really toxic* and I was extremely glad to move to my present location, Harper Adams University.  After signing in, which with twenty students took some time, Erica McAlister (@flygirl) led us through the thronged galleries (it was half term) to the staff 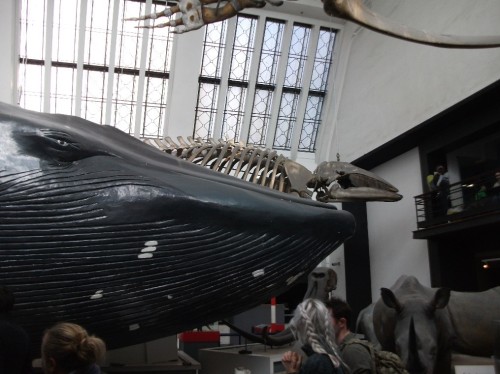 areas, where the research, identification and curating takes place.  Our first port of call was the Diptera where Erica regaled us with lurid tales of flies, big and small, beneficial and pestiferous. 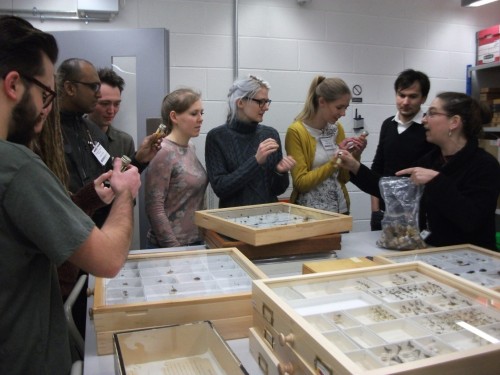 Any one fancy cake for tea?  Kungu cake, made from African gnats 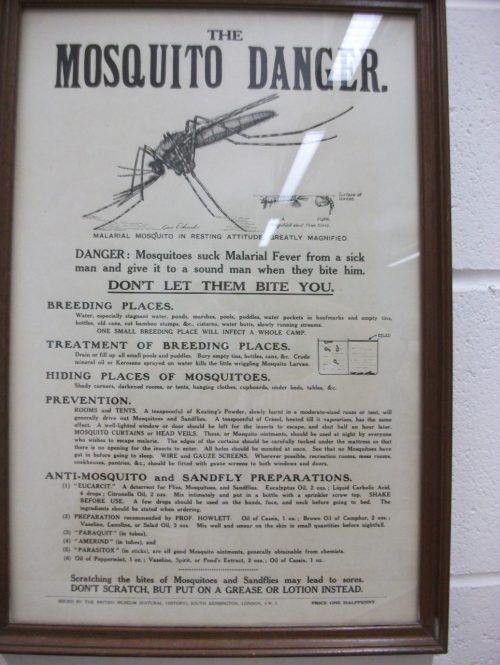 As we left to move on to the Hymenopteran, hosted by David Notton, I noticed this classic poster warning against mosquitoes.  David chose bees as the main focus of his part of the tour, which as four of the students will be doing bee-based research projects was very apt. 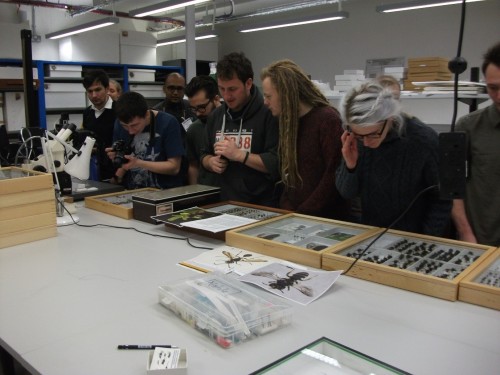 Whilst the students were engrossed with the bees I did a bit of fossicking and was amused to find that tobacco boxes were obviously a preferred choice by Scandinavian Hymenopterists in which to send their specimens to the museum.

Finnish and Swedish tobacco boxes being put to good use

Next was that most eminent of Coleopterists, Max @Coleopterist Barclay who as usual enthralled the students and me, with stories of

beetles large and small, anecdotes of Darwin and Wallace and the amusing story of how ancient clay-encased dung balls were for many years thought by anthropologists and archaeologists to be remnants of early humankind’s bolas hunting equipment.  It was only when someone accidentally broke one and found a long-dead dung beetle inside that the truth was revealed 🙂 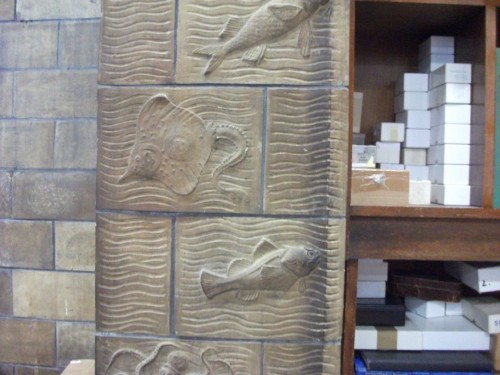 Often overlooked, the Natural History Museum is an exhibit in itself

As we were leaving to move on to the Lepidoptera section, I felt obliged to point out to the students that not only is the outside of the museum stunningly beautiful but that the interior is also a work of art in itself, something that a lot of visitors tend to overlook. Once in the Lepidoptera section  Geoff Martin proudly displayed his magnificent collection of Lepidoptera, gaudy and otherwise, including the type specimen of the Queen Alexandra’s Birdwing which was captured with the aid of a shotgun!

Lepidopterist, Geoff Martin, vying with his subjects in colourful appearance 🙂

Lunch and a chance to enjoy the galleries was next on the agenda.  Unfortunately, as it was half term this was easier said than done, although I did find a sunny spot to eat my packed lunch, as a Yorkshireman I always find the prices charged for refreshments by museums somewhat a painful.  In an almost deserted gallery I came across this rather nice picture.

Then it was on to the Spirit Collection.  Erica had laid on a special treat, Oliver Crimmen, fish man extraordinaire.  I may be an entomologist but I can sympathise with this branch of vertebrate zoology.  Fish, like insects are undeservedly ranked below the furries, despite being the most speciose vertebrate group.  I have been in the Spirit Room many times but have never seen inside the giant metal tanks.  Some of these, as Ollie demonstrated with a refreshing disregard for health and safety, are filled with giant fish floating in 70% alcohol.

Fish man, Oliver Crimmen, literally getting to grips with his subjects.

Many thanks to Erica McAlister for hosting and organising our visit and to the NHM staff who passionately attempted to convert the students to their respective ‘pets’.

*one day I will write about it.