A lost opportunity – why you should back up your data, even if it is on paper

In my twenty years at the Silwood Park campus of Imperial College, I supervised something in the order of 120 MSc research projects and at least 150 undergraduate final year projects.  Before my stint at Silwood Park I had spent ten years working for the Entomology Branch of the then UK Forest Research Division working on the population dynamics of forest pests.  My first ever PhD student, Paddy Walsh, (sadly he died a few years ago), worked on the predators associated with the pine beauty moth, Panolis flammea, with a particular interest in carabid beetles (Walsh et al., 1993ab). I was thus well aware of how useful pitfall traps were as a research tool; relatively easy to deploy and maintain and very good, perhaps too good, at collecting data 😊

An early star of the pitfall trapping world was Penny Greenslade, who addressed the critical issue of what pitfall trap catches were actually measuring and concluded that they were only useful in a very limited set of conditions (Greenslade, 1964ab). Coincidentally, Penny Greenslade did her PhD at Silwood Park (Greenslade, 1961) and having found her very battered thesis in the Silwood Park Library it occurred to me that a re-sampling of her sites would make an ideal BSc or MSc research project and so it proved. In 1995, Andy Salisbury, an extremely keen undergraduate entomologist, now Principal Entomologist at RHS Wisley, was the first student to repeat her 1959 survey.  Over the years a succession of students resurveyed her original sites (they were clearly identifiable from her thesis, although the vegetation associated with the sites was, in some cases different from when she conducted her trapping. By the time I left Silwood Park for pastures new in 2012, there were eight BSc project dissertations reporting the results of re-sampling Penny Greenslade’s original sites sitting on the shelves of my lab.

I still had PhD students based at Silwood Park when I left, so for two years I was retained as a Visiting Professor, which, given how much stuff I had (you have all seen what my office looks like and my office at Silwood Park was no different 😊) meant that I moved stuff gradually and piecemeal.  I moved my collection of PhD theses (44 at the time) early on, but delayed moving the almost 300 undergraduate and MSc theses as I wanted to triage them at leisure and only transfer those that I felt might be of use.

Now we come to the tragic bit, the Director of Silwood Park decided that he wanted to refurbish the building that my former office and laboratory were in, and without telling me, had my laboratory cleared and the contents skipped. To say that I was annoyed is somewhat of an understatement. Unfortunately, I had none of these theses in electronic form so the data and the story that might have been told, are lost forever 😦

That said, not all the data are lost, I have a partial record of the 2007 BSc thesis by Sarah Stow which to a certain extent, rubs salt in the wound, as it shows that there were indeed changes in the carabid community composition since 1959. 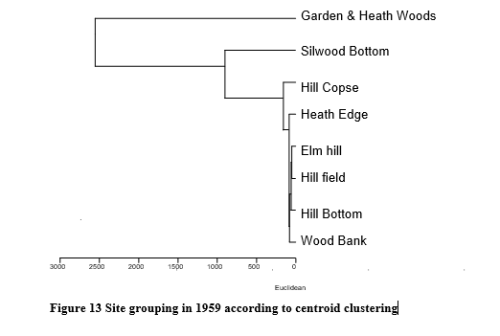 Although it might have been courteous if my former Head of Department had contacted me before disposing of the the project reports, or had them moved into storage to give me a chance of retrieving them, I can in all honesty, only blame myself for their loss.  I should have been less tardy in emptying my lab, I should have clearly indicated that I still had an interest in the contents of my lab, and of course, I should have backed up my data!

Greenslade, P.J.M. (1964b) The distribution, dispersal and size of a population of Nebria brevicollis (F) with comparative studies on three other Carabidae. Journal of Animal Ecology, 33, 311-333.

Walsh, P.J., Leather, S.R. & Day, K.R. (1993b) The effects of aerial application of fenitrothion on the carabid community of defoliated and undefoliated lodgepole pine, Pinus contorta. Journal of Applied Entomology, 115, 134-138.

Ten more papers that shook my world – When it comes to plant-insect interactions its growth stage, not age that counts Watt (1979)

This is not just about a paper, but also about mentoring!  At the beginning of October 1977, I hesitantly knocked on the door of Professor Tony Dixon’s outer office in the School of Biological Sciences at the University of East Anglia, Norwich.  Tony was to become my PhD supervisor for the next three years and my friend and colleague for the next forty plus years, but until that day I had never met him, as my interview had been conducted entirely by telephone and in those pre-internet days, unless you had met someone at a conference you really only knew them by their papers and reputation.  I knew Tony because of his great little book, The Biology of Aphids which I had bought as an undergraduate in 1975, when I realised that aphids were really cool 😊 I told his secretary who I was and she directed me through to his office.  Tony looked up, said hello and asking me to follow him, took me down to the lab where I was to spend the next three years and introduced me to a tall, moustachioed Scotsman, Allan Watt, whom I was later to discover had a wicked sense of humour, and was to become not just a colleague and collaborator, but also a great friend, a friendship that continues to this day.  Tony’s introduction was roughly along the lines of “This is Allan, he’ll tell you what to do” and he did. Allan was just starting the final year of his PhD which was, like a number of us in Tony’s lab, on cereal aphids, in Allan’s case Sitobion avenae and Metopolphium dirhodum, the two major pests of cereals in the UK at the time.  My PhD was on a less abundant (in cereal crops), but equally problematic aphid, due to its ability to transmit Barley Yellow Dwarf Virus, the bird cherry-oat aphid Rhopalosiphum padi.  Having got my aphid cultures set up and done a couple of practice mini-experiments, I asked Allan what he was doing with his aphids.  He told me that he was looking at the effect of cereal growth stage on the survival and reproduction of his two aphid species and that the age of the plant had a significant effect on the aphids and that this varied between the two species, which he published a couple of years later (Watt, 1979).  Having been immersed in the cereal aphid literature for a couple of months, I knew that no one had done this for my aphid, and even then, being a great believer in “standing on the shoulders of giants” I figured that I could do the same for my aphid, but, in that never ending treadmill of adding novelty, also look at the effect of feeding position*. Allan’s advice and help stood me in good stead, and in due course I successfully published the results of my experiment (Leather & Dixon, 1981).

So, leaving aside me getting a publication as a result of Allan’s paper, how did this shake my World?  Well, first of all, it really drove home to me that plant phenological stage was incredibly important for insect-plant interactions and that unless you know the precise growth stage at which an interaction is happening it is difficult to compare other peoples’ results to yours and each other’s. As a result, it has led me as a reviewer and reader of papers, to be very scathing of phrases such as “ten-day old wheat plant”, “week old cabbage seedlings”, “young pea plant” (Leather, 2010).  It is deeply unhelpful for anyone wanting to repeat or compare similar work.  Just a few degrees difference in temperature over a week can move a plant from one phenological stage to another. There is no excuse for this type of sloppiness.

It is not hard to find a solution.  The World has been blessed by the invention of the BBCH** system for coding plant phenological stages (Meier et al., 2009).  This system, which now exists for most major crop plants, including trees, means that there is no excuse for anyone to ever use the phrase “ten-day old plant” or similar wording. If by some chance, your plant does not yet have a BBCH description, either describe the growth stage that your plants are at in very precise terms or take the time to codify it yourself and submit it to a journal such as Annals of Applied Biology which has a long history of publishing such articles.

To be fair, before the BBCH system came into being, people had published descriptions of plant growth stages for some of the major crops, e.g. cereals (Feekes, 1941; Large, 1954), but they were not standardised, and in some cases, too broad-brush.  The stimulus for a standardised, decimal system of coding plant phenological stages was the publication of the Zadoks scale for cereals (Zadoks et al., 1974) and the illustrated follow-up a few years later (Tottman & Makepeace, 1979), the latter being the blueprint on which phenological growth stage papers are now based.

I look forward to the day when authors understand that a precise knowledge of plant growth stage is essential to understanding insect-plant interactions and I do NOT have to chide authors for not using the BBCH codification when I review their papers.

Watt, A.D. (1979) The effect of cereal growth stages on the reproductive activity of Sitobion avenae and Metopolphium dirhodum. Annals of Applied Biology, 91, 147-157.

*Rhopaloisphum padi, in contrast to Sitobion avenae, is usually found on the lower stem and leaves of cereals.

The abbreviation BBCH derives from the names of the originally participating stakeholders: “Biologische Bundesanstalt, Bundessortenamt und CHemische Industrie”. Allegedly, the abbreviation is said to unofficially represent the four companies that initially sponsored its development; Bayer, BASF, Ciba-Geigy, and Hoechst.

A road can be moved a, ecologically important raised bog cannot – planners need to think harder

This comment by ecologist Thomas Crowther caused a huge Twitterstorm from ecologists – I must admit I found it rather offensive too “ “The point is, I don’t believe it’s science until you’ve put it in that context: I can say ‘that bird is flying weirdly’ — that’s not science; that’s what most of ecology is at the moment. It’s natural history.” The full story is here.