In a very early post I mentioned that one of the reasons that I love aphids so much is their life-cycles https://simonleather.wordpress.com/aphidology/  and the fantastic jargon that is used to describe them.  Many undergraduates find the jargon off-putting but it was this complexity that really grabbed my imagination. 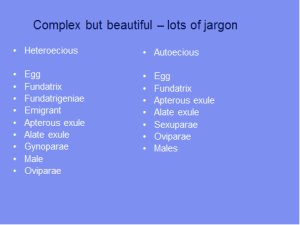 There are basically two types of aphid life-cycles, non-host alternating (autoecious, monoecious) and host alternating (heteroecious).   Autoecious aphids spend their entire life cycle in association with one plant species as shown below (Dixon, 1985). 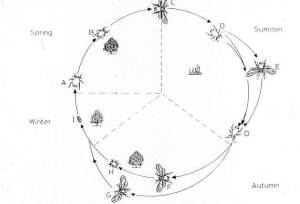 Approximately 10% of aphid species are heteroecious.  The ancestral aphid life cycle is thought to have been winged, egg laying and autoecious on a woody host plant almost certainly conifers and the oldest families of woody angiosperms e.g. Salicaceae (Mordwilko, 1928; Moran, 1992).

Aphid life cycles can also be described as holocyclic, in which cyclical parthenogenesis occurs, with aphids reproducing sexually in the autumn to produce an overwintering egg, in temperate regions and parthenogenetically during spring and summer as shown below for the sycamore aphid (Dixon, 1985).

Some aphids are anholocyclic where the clone is entirely asexual reproducing by parthenogenesis throughout the year. This is often seen in locations where winter conditions are mild, in the tropics for example or as a bit of an oddity around hot-springs in Iceland.

Host alternation appears to have arisen more than once (Moran, 1988) and occurs in four slightly different forms depending on the taxon in which it occurs.  The main differences being in whether the sexual forms are produced on the primary (winter) host (the host on which the eggs are laid), or as in the case of the Aphidini, the males being produced on the secondary (summer) host and the sexual females produced on the primary host.   The majority of aphids host alternate between unrelated woody and perennial hosts, but some species host alternate between herbaceous plants e.g. pea aphid Acyrthosiphon pisum alternates between the perennial vetches and the annual peas Pisum sativum (Muller & Steiner, 1985) and Urleucon gravicorne alternates between the perennial Solidago and the annual Erigeron (Moran 1983).  Some aphid species such as Rhopalosipum padi, have clones that are holocyclic and some that are anholocyclic, so hedge their bets and also gives me the opportunity to slip in a great slide kindly lent to me by my friend Richard Harrington at Rothamsted Research. 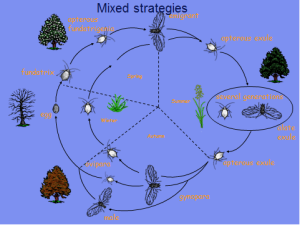 One of the things that is rather puzzling is why some aphid species should have adopted a host alternating life cycle which on the face of it, seems to be rather a risky strategy.  You could liken it to looking for a needle in a hay-stack; only about 1 in 300 aphids that leave the secondary host at the end of summer are likely to find their primary host (Ward et al, 1998).  There are a number of theories as to why it has evolved.

1. The nutritional optimization through complementary host growth hypothesis states that heteroecy has been favoured by natural selection because it enables a high rate of nutrient intake throughout the season (Davidson, 1927; Dixon, 1971).  In essence, the clone moves from a host plant where food quality is low and moves onto a herbaceous host that is growing rapidly and thus provides a good source of nutrition.  In autumn, the clone moves back to its primary woody host where leaves are beginning to senesce and provide a better source of nutrition as seen below (Dixon, 1985).

On the other hand, non-host alternating aphids such as the sycamore aphid, Drepanosiphum platanoidis, or the maple aphid, Periphyllus testudinaceus, reduce their metabolism and tough it out over the summer months when the leaves of their tree hosts are nutritionally poor, the former as adults, the latter as nymphs (aphid immature forms) known as dimorphs. Mortality over the summer in these species is, however, very high.  In some years I have recorded almost 100% mortality on some of my study trees, so very similar to the 99.4% mortality seen in the autumn migrants (gynoparae) of the bird cherry-oat aphid, Rhoaplosiphum padi.  Other autoecious aphids are able to track resources if they live on host plants that continue to develop growing points throughout the summer. 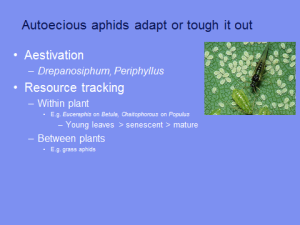 2. The oviposition site advantage hypothesis states that primary woody hosts provide better egg laying sites and provide emerging spring aphids with guaranteed food source (Moran, 1983).  There is however, no evidence that eggs laid on woody hosts survive the winter better than those laid in the herbaceous layer.  Egg mortality in both situations ranges from 70-90% (Leather, 1983, 1992, 1993).

3.  The enemy escape hypothesis states that by leaving the primary host as natural enemy populations begin to build up and moving to a secondary host largely devoid of enemies confers an advantage on those species that exhibit this trait (Way & Banks, 1968).  At the end of summer, when the natural enemies have ‘found’ the clone again, the clone then migrates back to its primary host, which theoretically is now free of natural enemies.  This is an attractive idea as it is well known that natural enemies tend to lag behind the populations of their prey.

4. The Rendez-vous hosts hypothesis suggests that host alternation assists mate location and enables wider mixing of genes than autoecy (Ward, 1991; Ward et al. 1998).  This seems reasonable, but as far as I know, no-one has as yet demonstrated that host-alternating aphid species have a more diverse set of genotypes than non-host alternating aphids.

5.  The temperature tolerance constraints hypothesis which postulates that seasonal morphs are adapted to lower or higher temperatures and that they are unable to exist on the respective host plants at the ‘wrong time of year’ (Dixon, 1985).  I don’t actually buy this one at all, as I have reared spring and autumn morphs at atypical temperatures and they have done perfectly well (Leather & Dixon, 1981), the constraint being the phenological stage of their host plant rather than the temperature.  In addition, there are some host alternating aphid species in which the fundatrix can exist on both the secondary and primary hosts (if the eggs are placed on the secondary host).  This has been experimentally demonstrated in the following species:

6.  The escape from induced host-plant defences hypothesis (Williams & Whitham, 1986), which states that by leaving the primary host as summer approaches, the aphids escape the plant defences being mustered against them.  This is only really applicable to those gall aphids where galled leaves are dropped prematurely by the host plant.

7.  The constraint of fundatrix specialisation hypothesis is that of Moran (1988), who argues that heteroecy is not an optimal life cycle but that it exists because the fundatrix generation (the first generation that hatches from the egg in spring) on the ancestral winter host, are constrained by their host affinities and are unable to shift to newly available nutritionally superior hosts.  Whilst it is true that some host alternating aphids are however, very host specific as fundatrcies, some aphids are equally host-specific as oviparae at the end of the year the constraints of ovipara specialisation

So what do I think?  For years I was very firmly convinced that the nutritional optimization hypothesis was the obvious answer; after all Tony Dixon was my PhD supervisor 😉  Now, however, having lectured on the subject to several cohorts of students, if I was forced to pick a favourite from the list above, I would do a bit of fence-sitting and suggest a combination of the nutritional optimization and enemy escape hypotheses. What do you think? There are cetainly a number of possible research projects that would be interesting to follow up, the problem is finding the funding 😦