Inspiring the next generation of entomologists?

In the last couple of weeks, I have had the privilege to be involved in two different types of outreach involving the younger generation.  The first was Skypeascientist, which I came across via a blog post by Amy Parachnowitsch on Small Pond Science. Amy was so enthusiastic about it that I couldn’t resist signing up, to what is a great idea; in their own words “Skype a Scientist matches scientists with classrooms around the world! Scientists will skype into the classroom for 30-60 minute Q and A sessions that can cover the scientist’s expertise or what it’s like to be a scientist. We want to give students the opportunity to get to know a “real scientist”, and this program allows us to reach students from all over the world without having to leave the lab!” My first, and so far only, but hopefully not my last match was with a small primary school in the Cumbrian fells.  We had a bit of trouble with getting Skype working to begin with, but once contact was established I was subjected to some great, and in a couple of instances, tough questioning; what are the mots abundant insects in the world for one.  We covered what I did, why I did it and how I got started, as well as questions like the what is the most dangerous insects in the world, had I found any new insects, where had I been to study insects,  and from one little joker “have you ever had ants in your pants?”.  All in all, a very positive and enjoyable session and one, that I hope will result in at least one future entomologist, although sadly, by the time he or she arrives on our soon to start new entomology undergraduate degree, I will be long retired ☹

The second outreach event was the Big Bang Fair held in Birmingham.  I participated in this last year and having enjoyed it so much, volunteered to help on two of the days; the fact that one of the days coincided with a deadly boring committee meeting that I would have had to attend otherwise, was purely coincidental 😉 If you’ve never heard of it, the Big Bang UK Young Scientists and Engineers Fair is the UK’s largest celebration of science, technology, engineering and maths, for young people, and is the largest youth event in the UK. The fair takes place annually in March, and was first run in 2009.  We, the Royal Entomological Society and Harper Adams University, first attended it last year, when a former student of mine, Fran Sconce, now Deputy Director of Outreach at the Royal Entomological Society, convinced us that it was a great event with which to become involved and to showcase our favourite science, entomology.  Fran was in charge this year too and did a sterling job as did the many volunteer demonstrators, drawn from among our current MSc entomologists and former students now doing PhDs.  They all did a fantastic job and I was hugely impressed by them all.

This was one of those events where the pictures tell the story but there were a few things that struck me.  First, I was surprised at how many of the teenage boys were afraid and disgusted by the thought of touching insects, the girls on the other hand, in the main were easier to win over to the concept.  When I was a teenager, now many years ago, it was the other way around.  Too much time spent indoors playing ‘shoot them up’ games perhaps might explain this, but perhaps that is too simple a view? Conversely pre-teens of both sexes seemed to respond in the same way, and overall were much easier to convince that it was safe and enjoyable to hold an insect.  Sadly, this seems to point to some anti-insect (maybe even Nature) ‘conditioning’ happening in young people once they leave primary education. Second, I was very surprised by how many times I was asked if the insect would bite them and/or was dangerous.  As I pointed out many times, “Would I be holding them and offering to let you hold them if they did and were?”  That said, I was very pleased that out exhibit attracted so much positive attention.  Some children made a lot of return visits 😊

Now over to the pictures, which show the diversity of the young and older folk who were entertained and enthralled by our hard-working insects and volunteers. One of the current MSc Entomology students and also a Royal Entomological Society Scholar, Brinna Barlow, demonstrating that you don’t have to be old, bearded and male to be an entomologist.

The First Day Team – the old and the new

A hive of activity at the entomology exhibit

Visitors and volunteers buzzing with enthusiasm

Some of our volunteers, Entomology MSc students past and present

Our new Entomology lecturer, Heather Campbell, showing that although she is an ant specialist, leaf insects are also cool. 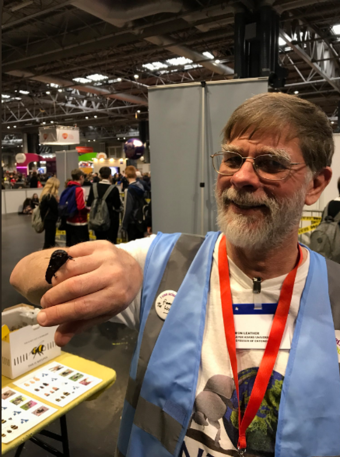 Yours truly demonstrating that quite a few entomologists are oldish, greyish, bearded and male, but remember, we were young once 🙂

Bearded and male, but definitely younger

And finally, without the enthusiasm, dedication, and hard work of Fran Sconce, and the willingness of our current MSc Entomologists to give up some of their exam revision time, our exhibit would have been much diminished.  It was a privilege to stand alongside them all.

The Director and star of the show, Fran Sconce, with one of her co-stars, both fantastic ambassadors for entomology.

This post has the dubious distinction of being the first one I have ever posted while at sea; the Dublin to Holyhead ferry, m.v. Ulysses to be precise 😊