A few weeks ago I read the first volume of Jocelyn Brooke’s Orchid trilogy, The Military Orchid. I have never been a great fan of orchids, my main experience of them being as ornamental house plants in which context I have always found them ugly, ungainly and obtrusive. 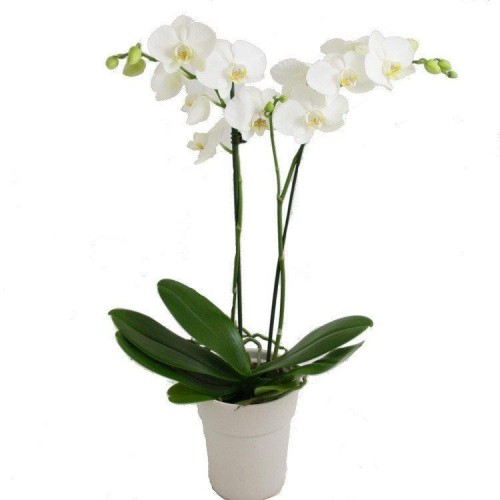 Jocelyn Brooke’s account of his search for the Military Orchid was however a bit of a revelation.  His obsession with the eponymous orchid reminded me of how I quite liked seeing the first emerging spikes of the common spotted orchid, Dactylorhiza fuchsii appearing in Heronsbrook Meadow at Silwood Park as I returned from my lunchtime run.  A little bit later Jeff Ollerton posted an interesting article about orchid pollination myths and this got me thinking about the common names of our native UK orchids, especially those named after arthropods.

It turns out that there are fewer than I thought; Bee, some varieties of which seem to be called the wasp orchid, the Fly, Lesser butterfly, Greater butterfly, Early spider and Late spider orchid being the lot.  My self-imposed mission was to first find a suitable photograph of each species to see if it did look like its namesake and secondly to identify the main pollinators.  Or to put it another way, exactly what are they mimicking and what or who are they really fooling?  Orchids generally speaking are honest brokers, providing nectar as a resource for pollination services (Nilsson, 1992).  About a quarter of orchid species are however frauds or cheats (Nilsson, 1992), either pretending to be a food source or a receptive female insect, nutritive deceptive or sexually (reproductive) deceptive as the jargon has it (Dafni, 1984).  Ophrys orchids are sexually deceptive (Nilsson 1992).

The Bee Orchid, Ophrys apifera, is pollinated by a solitary mining bee, Eucera longicornis  (Kullenberg, 1950) belonging to a group commonly known as long horned bees, which in the UK is rather uncommon meaning that the Bee Orchid is generally self-pollinated.

If you look at the female bee, which is what we suppose the flower is mimicking, you can just about convince yourself that there is a slight resemblance between the two.  Insects of course do not see things the same way humans do (Döring et al., 2012) so what we think is almost certainly irrelevant.  That said, it doesn’t actually have to be a particularly good visual mimic for the insects either, as it is the smell that really matters and as long as the flower is the right shape to enable the deceived male to copulate in such a way that the flower is fertilized that is all that matters.   To quote Dafni (1984) “The olfactory specificity allows a high degree of morphological variability because the selective pressures leading to uniformity-as a means for better recognition-are relaxed. When odors become the main means of attraction, they efficiently serve as isolating agents among closely related species”

The fly orchid, Ophrys insectiflora, is also sexually deceptive, but despite its common name is pollinated by digger wasps and bees (Kullenberg, 1950; Wolff 1950). 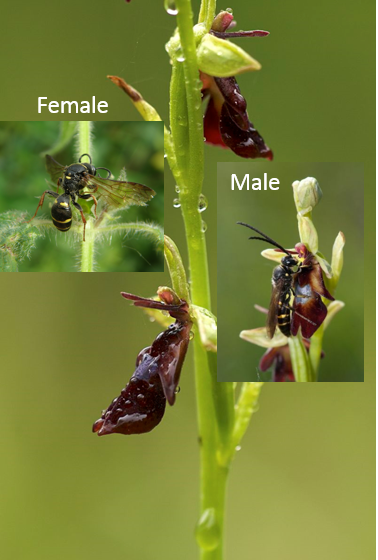 Oddly, despite being sexually deceptive it does, at least in my opinion, resemble its pollinators fairly well.

Next up (alphabetically), we have the Lesser Butterfly Orchid, Planthera bifolia, which despite its name is pollinated by night-flying hawk moths,

most commonly by the Pine Hawk Moth, Hyloicus pinastri and the Elephant Hawk Moth, Deilephila elpenor  (Nilsson (1983). These orchids provide a nectar reward, and attract their pollinators by producing a strong scent (Nilsson, 1978) easily detected by humans even at a distance (Tollsten & Bergström, 1989).  As an added extra, the flowers are very light-green and also highly light-reflecting, giving the moths a visual as well as an olfactory signal (Nilsson, 1978).  In terms of shape the flower more closely resembles H. pinastri. 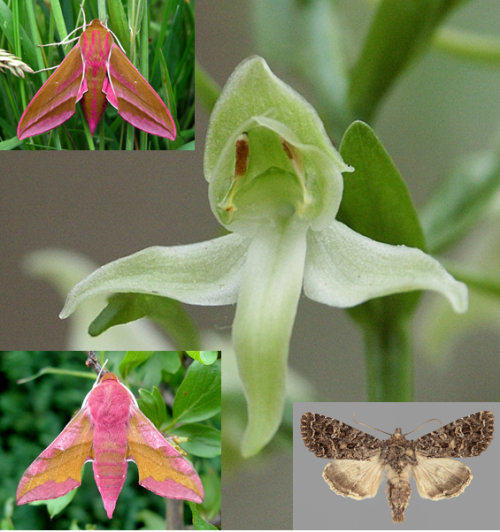 but mainly by Noctuid moths, most commonly, Apame furva (The Confused) and  A. monoglypha (the Dark Arches) Nilsson (1983).  Although recent video evidence has shown that the Pine Hawk moth also pollinates it (Steen, 2012).  Like the Lesser Butterfly Orchid, the flower only vaguely resembles its pollinators.  The chemicals responsible for the characteristic and intense fragrances of these two closely related orchids differ between the species and is probable that they are linked to the preferences of the different pollinator species (Nilsson, 1978).

Despite its name and suggested resemblance to its namesake, the Early Spider Orchid, Ophrys sphegodes is pollinated by a solitary bee, 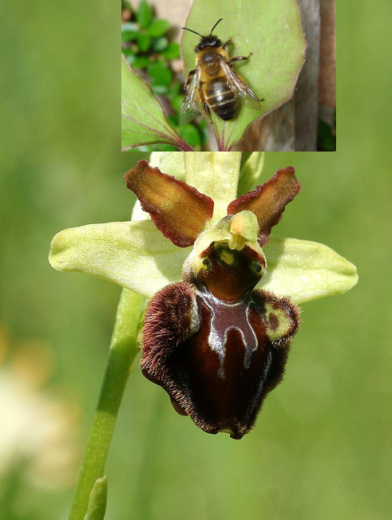 Andrena nigroaenea (Schiestl et al. 2000).  The scent of the nectarless flower, closely resembles the female sex pheromone of the bee and fools the male into ‘mating’ with it (Schiestl et al., 2000).  If you allow your imagination to run riot you could possibly just about see the flower as a giant female bee which might act as an extra stimulus for an excited male bee (Gaskett, 2011).

The final arthropod orchid is the Late Spider, Ophrys fuciflora; do be careful how you pronounce it, a soft c might be advisable 🙂

As with all Ophrys orchids, they are sexually deceptive and attract male insects to their nectar-free, but highly scented flowers, with the promise of a good time Vereecken et al., 2011).  Most pollination is by solitary bees (Kullenberg, 1950) although the Garden Chafer, Phyllopertha horticola has been recorded as pollinating it in northern France (Tyteca et al., 2006).  Again both pollinators could be said to resemble the flowers to some extent

That concludes my tour of UK arthropod orchids.  Having learnt a lot about other orchids in the last couple of weeks while researching this article it seemed a shame to waste it.  So, as an added bonus, I’m going to finish with a few imaginatively named orchids, the names of which do not refer to their pollinators but rather to the imagination of their human namers. 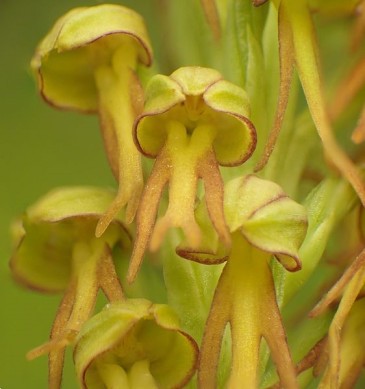 This not usually pollinated by sexually-deceived humans but by two beetles, Cantharis rustica (soldier beetle) and Cidnopus pilosus (click beetle) and also by two species of sawfly Tenthredopsis sp. and Arge thoracia (Schatz, 2006).

Again, as with the Man Orchid, the Monkey Orchid, is not pollinated by cruelly deceived anthropoids.  There are, as far as I can discover, only a few confirmed pollinators of O. simia.  They include the beetle C. pillosus, the moth Hemaris fuciformis and some hymenopterans such as honeybees (Schatz, 2006).  According to PlantLife, hybrids of the Man Orchid and Monkey Orchid are called the Missing Link Orchid.

My fellow blogger Jeff Ollerton and his colleagues (Waser et al., 1996), point out that pollination systems are not as specialist as many might think, and even in sexually-deceptive orchids that use pheromone mimics, many of their pollinators can get ‘confused’ and pollinate closely related orchid species.  Hence the existence of what are termed ‘natural hybrids’ such as the Missing Link Orchid and the interesting hybrid between the Fly Orchid and the Woodcock Orchid pictured below.

It looks like a belligerent penguin to me, but is of course pollinated by insects.

Often regarded as one of the most bizarrely flowered orchids is the Flying Duck Orchid, Caleana major from Australia. 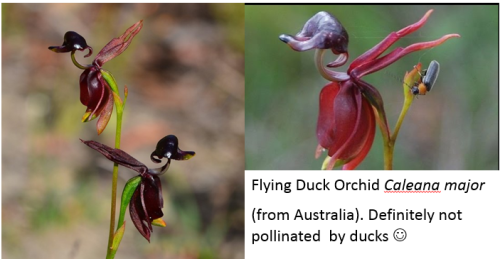 I was intrigued to notice what appears to be a Cantharid beetle, species of which are known to pollinate other orchids (Schatz, 2006), lurking in the background. There are a number of Cantharids noted as being pollinators in Australia, some of which have been recorded pollinating orchids, although not specifically on Calaena (Armstrong, 1979) so this may be an overlooked pollinator, just waiting to be confirmed by a dedicated pollinator biologist or orchidologist.  There is also, if you wondered, a Small Duck Orchid, Paracaleana minor.

Who would have thought that reading a biography would have started me off on such an interesting paper hunt?  Perhaps the most interesting new bit of information I discovered was that male orchid bees although they attract females with scents, do not produce their own pheromones but collect flower volatiles which they mix with volatiles from other sources like fungi, plant sap and resins (Arriaga-Osnaya et al., 2017).  They use these ‘perfumes’ as part of their competitive courtship behaviour to attract females; the best perfumier wins the lady J

And then you have Dracula vampira…. 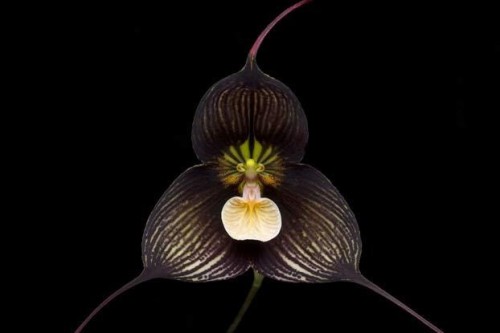 Dracula vampira (Vampire orchid) – only found in Ecuador (Photo: Eric Hunt, licensed under CC by 3.0).© Eric Hunt.  I hasten to add this is not pollinated by vampires, bats or otherwise.

But to finish, here is the one that started it all…

The one that started it all, The Military Orchid, Orchis militaris  https://upload.wikimedia.org/wikipedia/commons/d/d4/Orchis_militaris_110503a.jpg

Many thanks to Manu Saunders over at Ecology is Not a Dirty Word for sending me a key reference and also to her and Jeff Ollerton for casting critical ‘pre-publication’ eyes over this post.