Sadly this is the tenth and last in my series of the ten papers that had a great influence on my life as an ecologist.  I’m going to cheat somewhat and actually discuss three papers. In my defence they are extremely closely linked and I am pretty certain that in today’s publishing world they would all have had to have been combined anyway.  That aside, I really liked this experiment the first time I read about it and still rate it very highly.  I would, however, love to be able to travel back in time and give them a couple of hints with the benefit of hind-sight, although as the authors are two of the greatest living ecologists, Dan Simberloff and E O Wilson, I might be a bit apprehensive doing so 🙂 In any case, much of what I would have said was addressed a few years later (Simberloff, 1976).

Wilson and Simberloff wanted to practically test the island biogeography theory famously described by McArthur and Wilson a few year earlier (MacArthur & Wilson, 1967).  To do this they travelled to the Florida Keys and after due reconnaissance decided that the many mangrove “tree islands” would be ideal study sites (Figure 1).  Then came the really cool bit. 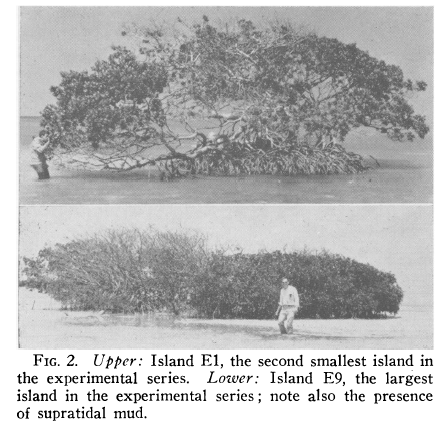 They set about removing the arthropod animal life from nine of the islands (Figure 2), or as much as they could, by fogging with methyl bromide; not something we could do now.  They then monitored the islands at frequent intervals for the next year.  They had of course surveyed the islands before they fumigated them. 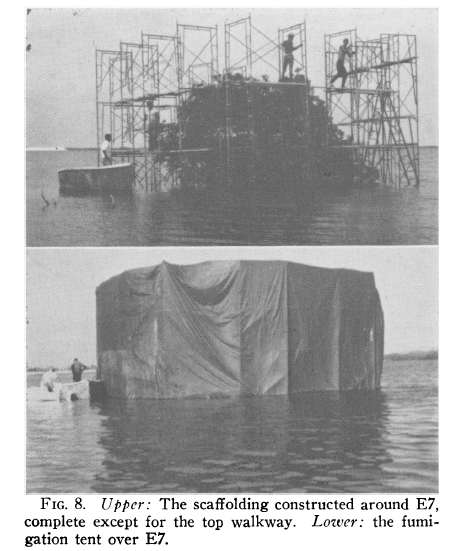 Figure 2.  What a cool project; defaunation in progress – from Wilson & Simberloff (1969) 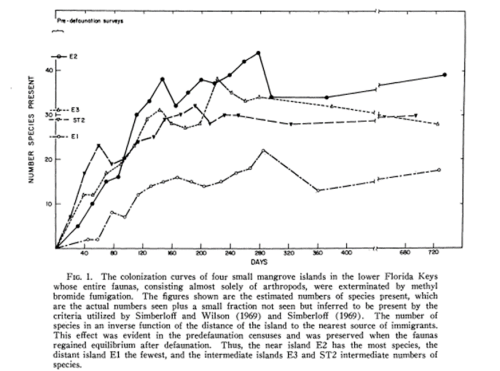 The major finding from their study was that recolonization happened quite quickly and that a year later had pretty much reached an equilibrium position (Figure 3).  Another important finding and one that has important implications for restoration and conservation strategies was that two years after the defaunation event, although the islands were well populated, the species composition, except for one island was less than 40% similar to the original inhabitants (Simberloff & Wilson (1970).  Most species present were new to those islands.  The analysis of the data presented in the two data papers is rather basic, some of the key island biogeographical premises are not addressed at all and I wondered why they had not done so.  Their data are all shown in some detail so it is possible to do some more analysis, which I took the liberty of doing.  The extra analysis shows why they did not discuss area effects per se .  The only significant relationship that I could find was that between the number of species and the distance from the ‘mainland’ source (Figure 4), which as predicted by MacArthur & Wilson (1967) was negative. Sadly, island size did not correlate with species number (Figure5).   Finally, there was a positive, but not significant relationship between the initial number of species found on an island and the number a year later (Figure 6).

Figure 5.  Island diameter and number of arthropod species (not statistically significant, r2 = 0.19, although I am sure many politicians would view this as a positive trend). Data from Simberloff & Wilson (1970)

Figure 6.  Initial number of species on an island and number of species present one year later. Although it looks convincing (r2 = 0.54), there are too few observations to reach statistical significance.  Data from Simberloff & Wilson (1970)

Although this work was extremely influential, (my Bracknell roundabouts study owes a lot to it), there were two major flaws in the original experimental design.  Firstly the number of islands was very low, but of course this is understandable, given the effort and complex logistics required to remove the arthropods safely (Figure 2).  The other flaw was that the islands did not cover a large enough range of sizes, thus making it less likely for the species-area pattern to be detected which was a great shame.

As I mentioned earlier, these short-comings were not ignored by the authors, and a few years later Sinberloff (1976) reported the results of an enhanced study, again in the Florida Keys, where he was able to convincingly demonstrate the species-area effect.   I guess that this was pretty satisfying as it tied up a number of loose strings.  He also managed to get the phrase “flogging a dead horse” into his introduction 🙂

Of the three papers, Simberloff & Wilson (1969) is the most highly cited (according to Google Scholar, 618 to date) and became a “citation classic”* in 1984 at which time it had accumulated 164 citations.  Simberloff & Wilson (1970) has attracted 252 cites with Wilson & Simberloff (1969) trailing in third with a mere 158 cites.  As a point of interest, Simberloff (1976) has so far received 313 cites.  To reiterate, the original mangrove island study, despite its flaws was a fantastic piece of work and Sinberloff and Wilson won the Mercer Award of the Ecological Society of America for this work in 1971.

I can think of no better person to explain why Simberloff & Wilson (1969) deserves its place in the Ecological Hall of Fame than Simberloff himself who in the commentary to the 1984 citation classic article wrote “I think the main reason it is cited, however, and its lasting contribution, is not so much that it supports the [equilibrium] theory, as that it reported a field experiment on ecological communities, and thus seemed dramatically different from the correlative approach that dominated this field”

*Those of you who remember Current Contents will know what this means and here is the actual commentary.