A little while ago I wrote about the phenomenon of  “green islands” caused by ants keeping insect herbivores away from trees.   If, however, you work on leaf miners, the term green islands means something else entirely.  Instead of referring to a feature of the landscape, it refers to a feature of the leaf, which unless you are Toby*, is definitely not a landscape-level phenomenon 😊

While some insects, aphids for example, induce senescence to improve the quality of their host plant and some plants induce senescence and early leaf-fall in those leaves that have been colonised by gall aphids in order to reduce their infestation load (Williams & Whitham, 1986), there are other insects that try desperately to prevent senescence so as to prolong their feeding life on what would otherwise be a dead leaf.

Green island leaf mine of the moth, Stigmella atricapatella – Many thanks to Mike Shurmer for the photographs.

The phenomenon of the green islands in autumn leaves associated with leaf mining Lepidoptera has been known about for some time (Hering, 1951), but although the adaptive value of this was easy to see, the causal mechanism remained unknown for some time. Similarly, plant pathologists had also noticed that one of the symptoms of powdery mildew infections is the appearance of a green ring around the necrotic spot caused by the fungus (von Tubeuf, 1897); if not a green island, a green atoll 😊

That fungi produced secretions containing plant growth substances such as the auxin (plant hormones) indole acetic acid has been known since the 1930s (Thimann, 1935) and it was later hypothesised that the levels present in the surrounding leaf tissue were associated with the resistance or lack thereof, to the fungal agent (e.g. Shaw & Hawkins, 1958). A further class of plant growth substances, initially termed kinins because of their similarity to kinetin (a cell growth promoting plant hormone, but later renamed cytokinins** (Skoog et al., 1965)) were discovered by Folke Skoog and co-workers (Miller et al., 1956) and linked to the production of green islands by plant pathogens (reviewed by Skoog & Armstrong, 1970).

“What about the leaf miners?” I hear you ask. You will be pleased to know that entomologists were not too far behind. Lisabeth Engelbrecht working on Nepticulid leaf miners on birch (Betula pendula) and Aspen (Populus tremula) set up a study (Engelbrecht, 1968) to test her hypothesises that the green islands were caused as a result of insect saliva or by the larvae physically cutting the leaf veins that would otherwise have delivered the chemical signal responsible for beginning leaf senescence. She discovered that the green islands contained large concentrations of cytokinin  (Engelbrecht, 1968) and working with other colleagues discovered that the labial glands of leaf mining larvae also contained cytokinin, but was unsure as to whether the cytokinin originated from the larvae or were formed in the leaf in response to chemicals in the saliva or frass of the larvae (Engelbrech et al., 1969), although if you read the paper it is quite clear that she is convinced that the source of the cytokinin is from the larvae and not the plant.

After all this excitement about insect produced cytokinin and green islands things seemed to go a bit dead.  I found a couple of passing references to the possibility that leaf mining Lepidopteran larvae use cytokinin to produce a green island to extend larval life after leaf abscission (Miller, 1973; Faeth, 1985) and an opinion piece discussing the possible adaptive role of using green islands to prolong larval life after leaf fall (Kahn & Cornell, 1983), but, surprisingly, nothing experimental to test this hypothesis. Oddly, I did find a paper testing the idea that early leaf abscission was an induced defence against leaf miners, where green islands were mentioned in the introduction but not mentioned again (Stiling & Simberloff, 1989).

Don’t get me wrong, plant pathologists and entomologists working on insect galls were still writing about the role of cytokinin (e.g. Murphy et al., 1997: Mapes & Davies, 2001), but leaf miner green island research seemed to have died.  Suddenly, however, in the mid-2000s the French ‘discovered’ leaf miners and David Giron and colleagues, showed how the leaf miner Phyllonorycer blancardella manipulates the nutritional quality of their host leaves by increasing the levels of cytokinin in the surrounding leaf tissue (Giron et al., 2007). 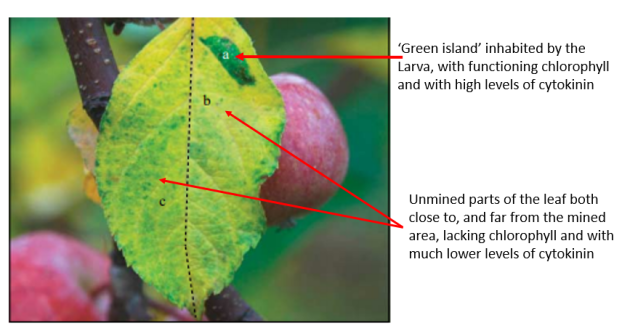 As we know from aphids, where insects play, bacterial symbionts are never far away, and sure enough it wasn’t long before it was shown that Wolbachia ‘infections’ were helping the leaf miners produce their ‘green islands’. Wilfried Kaiser and colleagues treated leaf miner larvae with antibiotics to remove the symbiont and found that the ‘cured’ larvae, although still able to feed and form leaf mines, were unable to produce ‘green islands’ and the levels of cytokinin were much lower than that found in the ‘green islands’ formed by untreated leaf miners (Kaiser et al., 2010).

The same group have also documented the mechanism by which the leaf miners and their symbionts work together (Body et al., 2013) and also, using molecular phylogenies and ecological trait data, shown that the existence of the ‘green island’ phenotype and Wolbachia infections are associated with the evolutionary diversification of the Gracillarid leaf miners (Gutzwiller et al., 2015).

You might expect that these findings would have stimulated renewed interest in the ‘green island’ phenomenon, but you would be wrong.  Despite the fact that at the time of writing this article (September 10th 2019) Kaiser et al. (2010) had, according to the Web of Science, been cited 105 times, only three papers dealing with this phenomenon have been published, the most recent appearing in early 2018 (Zhang et al., 2018) and, incidentally, by the same group that published the Kasier et al. (2010) study. It would appear that as with ‘green islands’, the study of the phenomenon is also very localised.

Miller, P.F. (1973) The biology of some Phyllonorycter species (Lepidoptera: Gracillariidae) mining leaves of oak and beech. Journal of Natural History, 7, 391-409.

*Toby Alone (La Vie Suspendue) by Timothée de Fombelle, is a fantastic novel, which I only fairly recently discovered, but can heartily recommend.

** Cytokinins are a class of plant growth substances that promote cell division, or cytokinesis, in plant roots and shoots. They are involved primarily in cell growth and differentiation, but also affect apical dominance, axillary bud growth, and leaf senescence. Wikipedia

Green islands – safe and healthy in a sea of death

Those of you whom work in forests, will, I am sure, be familiar with the term “green island”.  To a forester or forest entomologist, a green island is a clump of trees that have, for some reason or other, survived the ravages of an insect outbreak.  The earliest reference I can find to this phenomenon is in a 1927 paper by the German myrmecologist Hermann Eidmann (1897-1949), who described them as green oases, or, as the paper was written in German, more correctly, “grüne Oasen” (Eidmann, 1927). 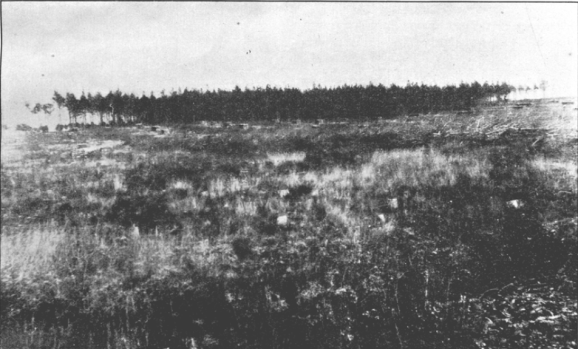 As well as “farming aphids” to obtain sugar from their honeydew, ants also have a similar mutualistic relationship with plants that give them a sugary reward to protect them from herbivorous insects, except those that also provide the ants with sugar (Janzen 1966; Bentley, 1977).  The mutualisms can be very sophisticated. In Michigan, the North American black cherry, Prunus serotina, times nectar production from its extra-floral nectaries to attract the ant Formica obscuripes  when the larvae of its major herbivore, the eastern tent caterpillar, Malacosoma americanum are at their most vulnerable (Tilman, 1978).  Trees that are protected have greatly reduced levels of herbivory. When more than one ant colony is involved, rather than single trees being protected, a group of trees can be saved from defoliation, and form a green island.  The areas covered by these green islands can be quite extensive, for example two ant colonies of the ant  Formica polyctena were enough to protect pine trees from the nun moth Lymantria monacha in Sweden within a 45 m diameter around the colonies (0.16 ha) (Wellenstein, 1980) and green islands of up to 3 ha have been reported (Eidmann, 1927).

Left – canopy of trees near ant nests, on the right, trees not close to ant nests Wellenstein (1980)

In Finland, one colony of the ant F. aquilonia is enough to create subarctic mountain birch (Betula pubescens), green islands of up to 0.12 ha in area (Laine & Niemelä, 1980).

Green islands attributed to the activity of the ant Formica aquilonia in subarctic Finland (Laine & Niemela, 1980).

It would seem that the case for the ants protecting the trees against defoliating herbivores and being the cause for the green islands is very convincing.  Tom White, never one to avoid a controversy, disagreed. He suggested that it was the nest building activities of the ants that were the cause for the green islands, the refuse dumps provide higher concentrations of nutrients that the roots of surrounding trees can access and additionally soil moisture conditions are improved, both these factors encouraging more vigorous growth in those trees close to ant nests, making them less palatable to herbivores (White, 1985).   The Finnish team responded to this with some additional data and arguments defending their hypothesis (Niemelä & Laine, 1986) and there the matter rested, for a while at least. Not satisfied with their post hoc response, the Finns came up with, to me at any rate, a very convincing field experiment where they showed that soil nitrogen did not vary significantly with distance from ant nests and that birch leaf nitrogen content and moth larval growth rates and survival were also not affected by distance from ant nests (Karhu, 1998; Karhu & Neuvonen, 1998), indicating that the green islands were indeed, due to predation by the ants and not improved tree nutrition.

You might think that this would be the last word, but you would be wrong 🙂  The Karhu and Neuvonen paper, is, in the journal, followed by a “comment” paper by no less a person than Tom White (White 1998) in which he disputes in no uncertain terms, their interpretation of their new data.  Matthias Schaefer, the then Editor of Oecologia, felt that some sort of explanation was needed and added a final note to the saga, which in itself makes very interesting reading.  I get the feeling that there were some strong emotions involved 🙂