ENTO13 – Small, friendly and by the sea 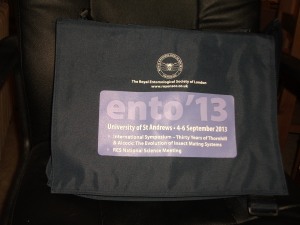 The symposium, Thirty years of Thornhill & Alcock: The Evolution of Insect Mating Systems, brought together an eclectic group of entomologists to discuss sperm, genitalia and strange and diverse mating habits.  I have to say that some of the genitalia shown were very impressive, one insect penis even having articulated jaws hidden among all the other nasty looking spines adorning it.  Who would want to be a female insect was, I imagine, the thought that crossed the mind of many, if not all, of the audience.  But I’m not here to talk about sex, or even rock and roll.  What I am going to do is to reflect on the differences between this conference and the one I attended a couple of weeks before, INTECOL2013.  INTECOL2013, held in the ExCel, London had about 3000 ecological delegates from around the world representing a huge diversity of interests.  ENTO13, based at the sea-side University of St
Andrews, had about 150 delegates, many of whom were specialists in insect reproductive strategies but also an equal number 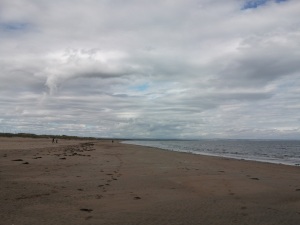 of entomologists ranging from pest managers to lepidopterists and from PhD students to those who had cut their entomological teeth in the 1950s and ‘60s.  For me and my accompanying PhD student, Francisca Sconce and co-driver, this meant a car journey of about 6½ hours, luckily in a very comfortable, apparently ecological car, a Hyundai i30 Blue which took us all the way there and back on one tank of diesel, with according to the fancy display, another 100 miles in reserve.

The accommodation in Agnes Blackadder Hall was pretty palatial, with double beds, en-suite facilities and a television.  Things have certainly changed since I was a student in undergraduate accommodation at the University of Leeds in the mid-1970s.

The programme started on the 4th with the sessions up until the very nice lunches, being the symposium, and after-lunch sessions being the presentations associated with the national meeting.  For those interested, the symposium speakers included Göran Arnqvist (Uppsala), Boris Baer (University of Western Australia), Bruno Buzatto (Western Australia), John Hunt (Exeter), Hanna Kokko (ANU), Trish Moore (Georgia), Ben Normark (UMASS), Mike Richie (St Andrews), Leigh Simmons (Western Australia), Per Smiseth (Edinburgh), Rhonda Snook (Sheffield) and Nina Wedell (University of Exeter).  Some of the speakers had known Randy Thornville and John Alcock, others were in utero or not even a twinkle in the eye, when the famous book appeared in 1983. 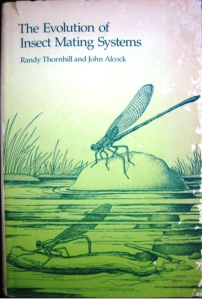 The afternoon speakers ranged in subject area from agro-ecology, sexual selection and in my case, social media and entomology.  Unlike INTECOL2013, where I spent an equal amount of time between talks and roaming the poster hall, I managed to attend a full set of talks each day, except for one that I missed by accident.  So a full, varied and very interesting programme. I have to say that having only two concurrent sessions made it a lot easier to make decisions; a definite advantage that smaller conferences have over bigger ones.

I mentioned the delegate badges at INTECOL2013, giving them a definite thumbs-up, so it is only fair that I mention the ENTO13 ones.  They were not large, but the font was a good size and both sides of  the badge had our names on, so it didn’t matter if they twizzled round during the day. 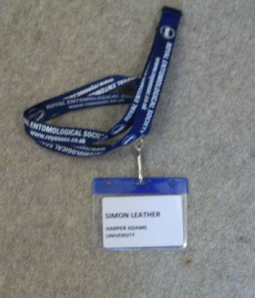 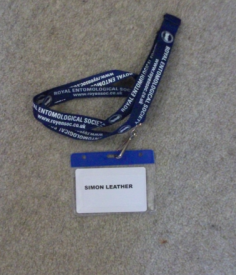 Delegates as I have already intimated, ranged from those of us who can remember the 1970s to those who had heard of the 1970s from their parents.  It was also heartening to see how many of the  younger entomologists present were female.  For me, it was also great to see how many of the students that I had taught on the MSc Entomology course, originally at Silwood Park and now 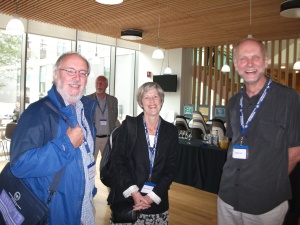 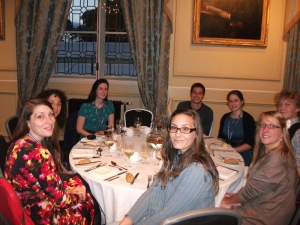 at Harper Adams University, were talking, exhibiting posters or just in attendance.  It was great to see old friends, some like Darryl Gwynne, whom I have known for over 20 years via email, but had never met, and to meet and talk to many others.  I didn’t get to talk to all the delegates, but unlike INTECOL2013, I did manage to see everyone that I had intended to.

At the very nice conference dinner, where our starter was a very nice mini haggis, neeps and tattie confection,  our President Jeremy Thomas, gave a mercifully short speech and allowed Fellows to sign the Obligation Book, if they had not already done so. 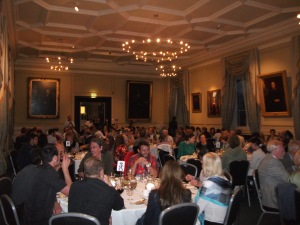 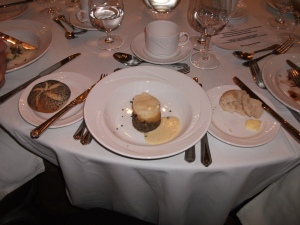 For those not  immersed in the arcane lore of the Royal Entomological Society, the Obligations Book is signed by newly elected Fellows the first time that they are at meeting where the book is present.  As the book very rarely leaves London, it is sometimes several years before a Fellow actually signs the book and accepts the obligations placed on him or her, as a member of the Society.  The really thrilling thing about the Obligations Book is that as well as being signed twice by Queen Victoria, once as Princess Victoria when she became the Patron of the Society, it also contains the signatures of Charles Darwin and Alfred Russel Wallace.  This meeting was the second time that the book had been in Scotland, the first time being back in April 1984 at a meeting organised by Allan Watt and myself in Edinburgh.  It brought back memories to see our signatures preserved for posterity, although my signature over the years has deteriorated seriously and now no longer resembles the one in the book. 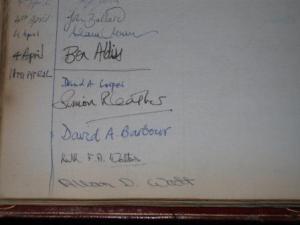 Being in Scotland, there was of course the obligatory ceilidh after the conference dinner.  As I was speaking the next day, I had only one dance and one swift dram of the Macallan. 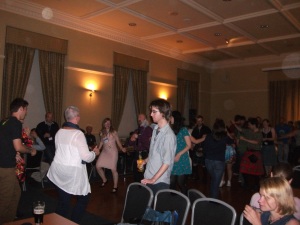 My talk, first one after lunch on the last day of the conference, not exactly a prime-time slot, was all about why I began to Tweet and Blog, and will be the subject of  a future post.  Speaking of Twitter, ENTO13 was not as Tweet-enabled as INTECOL2013, but a small, but dedicated band of tweeters summarised every talk throughout the conference and we engaged “Tweetisitors”, not only from the UK but Australia, New Zealand, Canada and the USA. 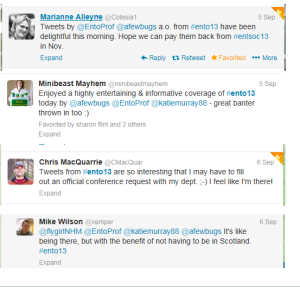 Overall, ENTO13 was a thoroughly enjoyable and informative conference and I would like to thank the Royal Entomological Society and the symposium organisers for providing me the opportunity to re-visit St Andrews and to meet so many interesting entomologists.

I also managed to add a new roundabout to my collection – this double just outside the university, the big one with appropriately enough, Scots pine trees, the other with various exotics. 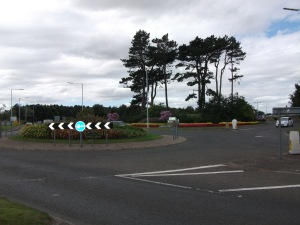