Sometimes big can be good – Reflections on INTECOL 2013

Warning:  I am not going to discuss the science presented, just my impressions of the conference as a whole.

In April I wrote about my dislike of big international conferences  citing reasons such as  the difficulty in finding people, session clashes, people giving talks on already published papers and the tendency of just talking to people you already know.  I finished the article somewhat cynically, with the phrase “perhaps INTECOL will prove me wrong”; for those of you who may not know, INTECOL is the acronym of the International Association for Ecology (I had to look it up myself to get it exactly right).  INTECOL 2013 (#INT13 for Twitter users) coincided with the 100th birthday of the British Ecological Society and was held at the ExCel Centre in London.  It thus promised to be a very large event.  So two strikes against it already as far as I was concerned, huge conference and in London, probably my least favourite city of all time; twenty years of commuting into the South Kensington campus of Imperial College from Bracknell has not left me pleasant memories and although having had a cosmopolitan childhood I am a small village boy at heart.  I probably wouldn’t have gone to INTECOL at all, if the British Ecological Society hadn’t subsidised my attendance (I am an Associate Editor for the Journal of Animal Ecology) and we hadn’t taken our summer holiday earlier than usual this year.  I decided that I would commute in daily, rather than pay for accommodation; we still have a house in Bracknell, despite me working in Shropshire, and it would also give me the opportunity to have some family time.

For me the conference started on Sunday morning when my wife and I travelled into the ExCel Centre to set up the Harper Adams University display stand.  This was done very quickly and we then went for a walk in the sunshine to look at the surrounding area with the impressive London Dockers statue just outside the ExCel , and the street food outlets down near the

Emirates Air Lines (cable cars across the  Thames) and an abortive trip to look at the London Olympic site (no access available); luckily next to the Westfield Shopping Centre, so some entertainment there;  people watching from the M&S Café on the Bridge and a free taster glass of the new Pimms flavour, blackberry and elderflower.  Then back to the ExCel for the very pleasant welcome mixer, where as I had predicted I spoke to people I already knew and then back home to Bracknell.  I was up very early on Monday to catch the dreaded Reading to Waterloo slow service (65 minutes from Bracknell to Waterloo) and then the 40 minute tube and DLR journey from Waterloo to Prince Regent and the ExCel.  Things were very busy but as I had volunteered to do student talk judging, my schedule was fixed for me for the first two days; no need to wade through the huge programme and sigh over clashes.   At the first plenary it was announced that questions would only be taken via Twitter; there were a few disgruntled groans from the audience but as a Twitter convert of less than a year, I was intrigued and  it also gave me an idea.  There and then I decided that I would try to say hello in person to as many people I could find who followed me on Twitter, my fellow Tweeps.  I had a mission and I have to admit it made the meeting quite fun, instead of waiting for people to say hello and mainly just talking to old friends I was on the hunt; as an entomologist it reminded me very much of my childhood days of insect collecting.  This was also made easier by the very user-friendly delegate badges, actually readable at a distance and here I at least, was very pleased with the draconian attitude of the ExCel 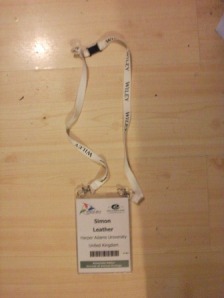 security staff who insisted that badges were worn at all times by delegates.  It always annoys me when delegates don’t wear their badges and when the lettering is so small that you have to get embarrassingly close to people’s vital areas to identify them 😉  Note that in the picture above the lanyard is positioned to prevent the badge turning round and being unreadable; many people used the central hole which meant that their badges were often totally useless as a means of identification.

no matter I had a mission and was enjoying the conference and meeting lots of new people. The second conference-changing moment was the plenary lectures and asking questions via Twitter, or Tweeqs as I called them.  One problem I did have, was that I found it difficult to type and listen at the same time; how do students manage in lectures?  I also found that although you could ask a question there was then no chance to riposte when the speaker answered verbally to the whole audience, so no real debate, but I think it has potential.  For example, my question to Georgina Mace, who gave a very good lecture on biodiversity conservation in the 21st Century but largely ignored invertebrates when making assumptions and predictions about the future, was not entirely answered to my

satisfaction, being along the lines of yes I know that data are not balanced but we are waiting for you guys to produce similar data sets, did generate some Twitter debate but I was not able to respond directly to Georgina.  Still, I think that this is definitely an

creative way forward and allows people not at a conferences to ‘attend’.  I especially highlight this for the benefit of Chris Buddle of McGill University and Blogger extra-ordinaire at Arthropod Ecology, who although not at INTECOL, was able to participate, albeit only at a distance (from Canada to be precise).

Perhaps at future meetings there may be some way to employ an official conference tweeter (or more), akin to the way translators are used at the United Nations?

I also very much enjoyed meeting many of the next generation of ecologists as well as chatting to many ex-students and colleagues.  I would especially like to highlight the fact that Kathryn Luckett, a PhD student at Silwood Park, publicised, first via Twitter and secondly by her recent blog post, about the inequality in ecology of career progression for female scientists as very well illustrated by the presenters at the conference. 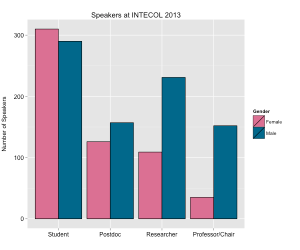 I think that this is something for us all to think very hard about. and I urge you to read her post.

Commuting as I was, meant that I was not as able to take part in the social events to the same extent as those staying in the very nearby hotels, healthier for both my wallet and my liver, although that said I did pick up a cold – not sure who to blame for that, the daily tube journey or the influx of delegates from all around the world!

The programme overall was excellent, the speakers in the main, fantastic, and the organisation by the BES and local committee very good indeed.  I would have liked it better if the coffee and tea had been on tap all day and not at set times.  The BES Centenary party was a superb idea, even though I had to leave before the band started!  So on the whole; I actually enjoyed this conference very much but I am not sure how much I gained scientifically.  I do think, however, that everyone had a great time and I certainly made many useful contacts, although as predicted there were a number of people who I wanted to see who I never did manage to find.  Well done BES and INTECOL for putting on such a great event. It is always good to be proved wrong once in a while, especially if it is a pleasant surprise.

The week after next, I am presenting a talk at ENTO13 at St Andrews University, on the usefulness of social media for scientists.  This will be a much smaller conference, albeit international.  I wonder if I will enjoy it as much or more?

Post script – for those of you curious about the stand, here is a picture of it with me and Fran Sconce (a PhD student of mine working on Collembola) in attendance.  Note that we are both wearing butterfly themed clothing – how entomological can you get 😉 and our badges are the right way round. 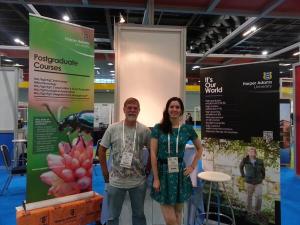