“To him that countryside, largely unspoiled in his early days, was an inexhaustible source of delight and a subject of endless study and mediation…And as the years passed and the countryside faded away under the withering touch of mechanical transport, that knowledge grew more and more precious. Now, the dwindling remnants had to be sought and found with considered judgement and their scanty material eked out with detail from the stores of the remembered past”  R Austin Freeman The Jacob Street Mystery (1942)

The recent release of the IPBES report highlighting the significant global declines in biodiversity has prompted me to revisit the “Insectageddon” debate, some of the ramifications of which I wrote about earlier this year. 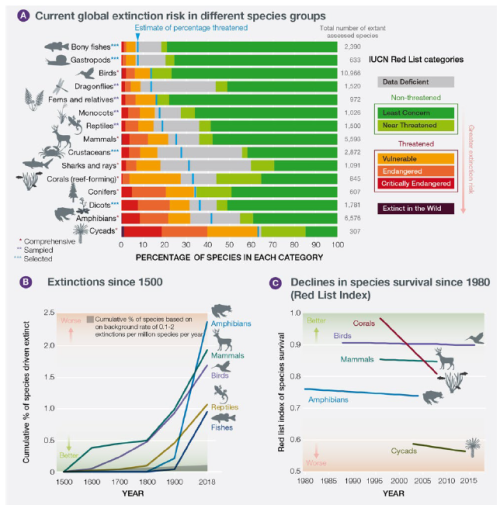 Summary from the IPBES report – note that even a well-known group like dragonflies is quite data deficient*.

Insects may be in decline, but papers about their decline have been around for almost twenty years and even more are appearing as we entomologists begin to hope that people may at last be beginning to listen to us. 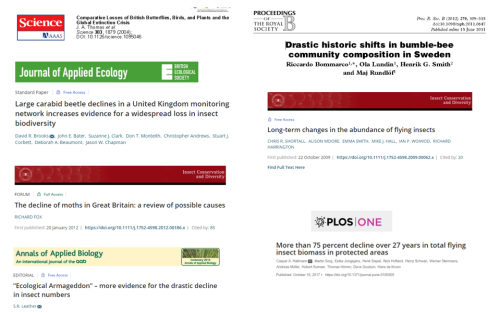 A selection of some of the many papers that have documented insect declines over the last several years.

Using the now infamous search term “insect decline” in the Google Trends function I was not surprised to see the steep increase since 2016, as 2017 was the year in which the paper reporting  the 75% decline in flying insect biomass appeared (Hallmann et al., 2017), but I was intrigued by what appeared to have been a peak in mentions since 2004. 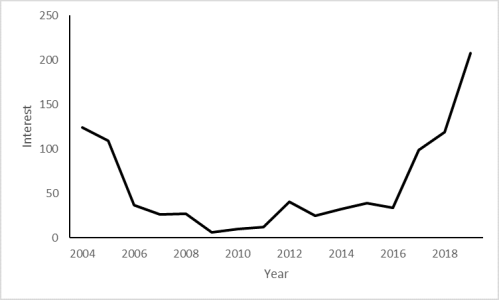 I wondered what caused the peak in 2004, so using the same key words as Sánchez-Bayo & Wyckhuys (2019), checked Google Scholar and Web of Science to see if I could track down a paper that might have caused a media splash at the time.  I also checked 2003, in case there was a delay in reporting. To my surprise I couldn’t find anything relevant in 2004, but 2003 threw up three papers (Hopkins & Freckleton, 2002; Kotze & O’Hara, 2003; Dennis & Shreeve, 2003).  The first was about the decline of taxonomists, which although a serious problem is unlikely to have generated that much attention, the other two were about long-term declines in Carabid beetles (Kotze & O’Hara, 2003) and the third about the decline of French butterflies (Dennis & Shreeve, 2003) which again, I suspect were probably not high enough profile to generate a big splash.  I was puzzled but then I thought, why not just put it into Google with the date 2004, and sure enough it directed me to a Nature News item with the headline Insect deaths add to extinction fears, which in turn led me to Thomas et al., (2004) which I am pretty certain generated the peak in interest and also highlights the fact that ecologists and entomologists have been worrying about this problem for some time.

Since the appearance of the, now, infamous paper, that sparked the most recent round of Armageddon stories (Sánchez-Bayo & Wyckhuys, 2019), a lot has been, quite justifiably, written about the short-comings of the study both in scientific journals (e.g. Komonen et al., 2019, Simmons et al., 2019; Thomas et al, 2019, Wagner, 2019) and in blog posts, such as this thoughtful piece from Manu Saunders. 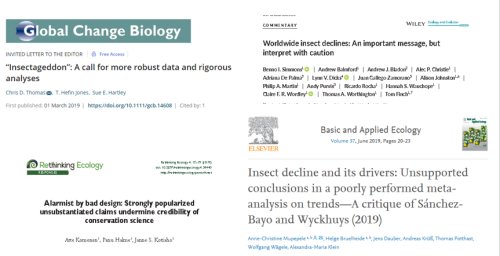 What does need to be stressed, is that although these commentators recognise the shortcomings of the paper, none of them, including the most scathing of commentators (Mupepele et al., 2019) dispute the fact, that insects, in general, are in decline. Unfortunately, the climate change deniers and their ilk, have, of course, used the criticisms to try and spread a message of “nothing to fear folks”. 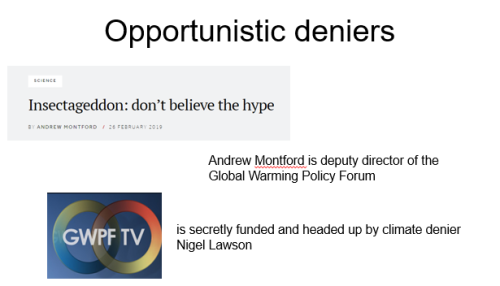 Hopefully a failed attempt at downplaying the insect decline stories, but a great example of how climate change deniers are keen to muddy the waters

For humans with our relatively short lifespans, shifting baselines can be a problem (Leather & Quicke, 2010; Tree, 2018), in that people accept what they have known in their childhoods as the natural state of nature.  It can of course work the other way. I can remember the late great Miriam Rothschild telling me in the early 1990s, how as a “gel” in the 1920s a particular butterfly species that was currently at very low numbers compared with the 1970s which was what I and similar aged colleagues were remarking upon, was 50 years before that, also very low, her message being “populations cycle”.  It is because of this propensity, which is nicely illustrated by some of my 20-year data sets, all from the same 52 trees, that we need access to long-term funding to monitor insect populations.  Chop my data sets into three-year concurrent periods, the time-span of a typical PhD study or research grant, and you end up with some very different pictures of the populations of three common insect species. 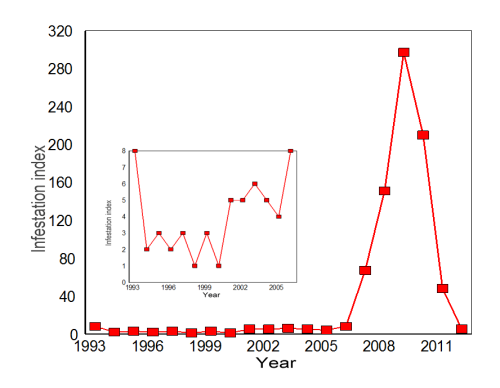 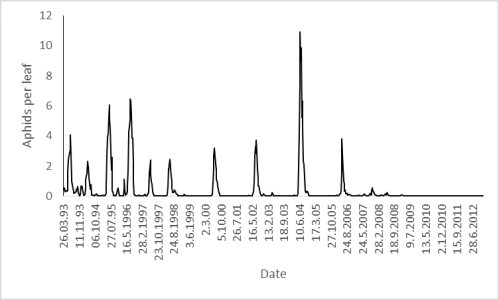 Twenty years of the Sycamore aphid, Drepanosiphum platanoidis, at Silwood Park.  First five years versus last five years – what happened? Does this fit with the recent paper by Stephen Heard and colleagues that species chosen for study because they are common or easy to find, are almost certainly to show declines over the long-term? 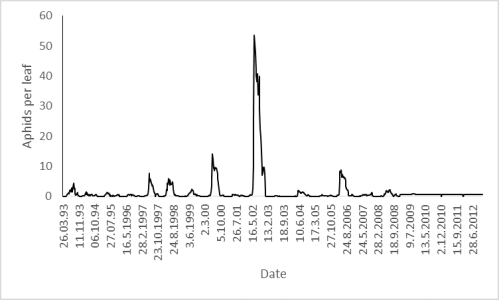 Given the above, and the fact that most of the evidence for insect declines is largely based on studies from Europe, the UK heading the list (Wagner, 2019) and on top of that, the evidence from tropical locations is open to different interpretations (e.g.  Willig et al, 2019), there is an urgent need for something to be done.  So, what do we need to do?  I think there are three things that need addressing, sooner, rather than later.

First, we need to build on the work that has been done in Germany (Hallmann et al., 2017) and the UK via the Rothamsted Insect Survey (Bell et al., 2015) and establish active insect monitoring networks using repeatable sampling methods, but on a global scale. New monitoring programs will not help establish past baselines, but they can help us determine trends from this point forward. We can make this truly global by engaging the public through community science. These programs will need to use standardized methods, such as Malaise traps, pitfall traps, light traps, and effort-based counts, with species diversity, abundance and biomass being primary measures. Although biomass is an imperfect estimator because it can be sensitive to changes in abundances of large species, it is still a valuable metric from the ecosystem perspective. Determining biomass trends also does not require fine-scale taxonomic knowledge, which is often lacking in citizen science initiatives. It would, even if it were possible, be incredibly expensive, to try to monitor all insect species from any community with appreciable diversity.  A much better option, and one that will certainly appeal to a wide range of citizen scientists would be to monitor taxa like butterflies, macro-moths, dragonflies, bees, and some beetle groups.  All these can serve as indicator species for other insect groups and, tongue in cheek, many can be observed using binoculars, thus encouraging ornithologists and mammalologists to join in 😊

Innovative use of past data

At national levels, a few long-term monitoring schemes already exist, for example, the UK Environmental Change Network (http://www.ecn.ac.uk/ ) collects biotic and abiotic data, including many insect groups, from 57 different sites across the UK using identical protocols (Rennie, 2016).   Multiple Long-Term Ecological Research projects track different facets of ecosystems in different ways (Magurran et al., 2010). In fact, the LTER network, if expanded to a global scale, could be the natural framework to make a global network proposal feasible, possibly through a targeted step change in funding (Thomas et al., 2019).  This is great for the future, but unfortunately, all the active long-term monitoring schemes are younger than modern agricultural intensification.  A way forward would be to use museum collections and to construct data sets by going through back numbers of those entomological journals that pre-date the 1940s.  There are some long-term historical long-term data that are already accessible, for example the 150 year record pine beauty moth infestations in Germany dating from 1810 (Klimetzek, 1972) and I am sure that others must exist.

Whatever we do, it will need long-term funding. There needs to be a recognition by state research funding agencies that entomological survey and monitoring work, although appearing mundane, should receive a step-change in funding, even if it is at the expense of other taxa  Funding should reflect the diversity and abundance of taxa, not their perceived charisma (Clark & May, 2002; Leather, 2013).  Crowd-funding may draw in some funding, but what is required is stable, substantial and sustained funding that will allow existing and future international collaborations to flourish.  For this to happen and failing sustained state funding, we need to convince philanthropic donors such as the Gates Foundation to turn their attention from insect eradication to insect conservation.

We do, however, need to act quickly, stop talking to just our peers, meet the public, and, if needs be, personally, or via our learned societies, lobby governments; there is no Planet B.

A recent paper has shown that European dragonflies are doing quite well; yet another example of how different groups respond in different ways.