Not all aphid galls are the same

A galling experience – what on earth is an aphid-induced phytotoxemia?

Scientists, actually let me correct that, all members of specialist groups, be they plumbers or astrophysicists, love their jargon.  Insect-induced phytotoxemias is a great example. What entomologists and plant physiologists mean by this term is plant damage caused by an insect.  The visible damage that insects can cause to plants ranges from discolouration, lesions, and malformation of stems and leaves. As the title of this post suggests I am going to discuss galls.  Many insects produce galls, some of which can be spectacular such as Robin’s pin cushion gall caused by the wasp, Diplolepis rosae, but being a staunch aphidologist I am going to concentrate on various leaf deformities caused by aphids.

Aphids are true bugs, they are characterised by the possession of piercing and sucking mouthparts, the stylets, think of a hypodermic needle, being the piercing part of the mouthparts.

Aphid mouthparts, showing the passage of the stylets to the phloem (Dixon, 1973).

It was originally thought that the various leaf deformities resulting from aphid feeding was a direct result of the mechanical damage caused by the stylet entering the leaf and rupturing cell walls or possibly by the transmission of a disease. A series of elegant experiments by Kenneth Smith in the 1920s showed however, that insect salivary gland extracts were needed to cause the damage (Smith, 1920, 1926).  Puncturing leaves with needles did not produce the same symptoms.  The leaf rolls, leaf curls and pseudo-galls caused by aphids vary between species even when the aphids are closely related or their host plants are.  As an example of the latter, the bird cherry-oat aphid, Rhopalosiphum padi, causes what I would describe as a leaf roll, i.e. the leaves curl in from the edges towards the mid-rib, to make something that resembles a sausage.

On the other hand, the cherry blackfly, Myzus cerasi, that has Prunus avium as its primary host, causes what I describe as leaf curls (think ringlets and curls in human hair terms), in that the leaf rolls up from the tip down towards the stalk (petiole). 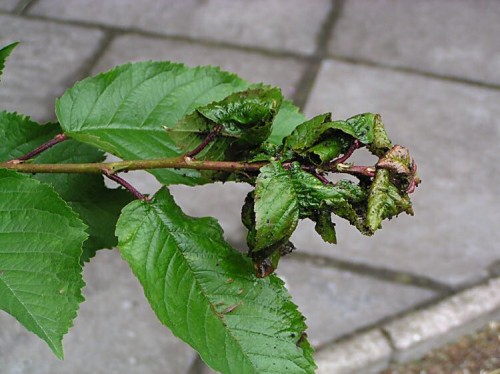 As well as leaf rolls and leaf curls, some aphids are able to induce leaf folds.  The poplar-buttercup gall aphid, Thecabius affinis being a good example. 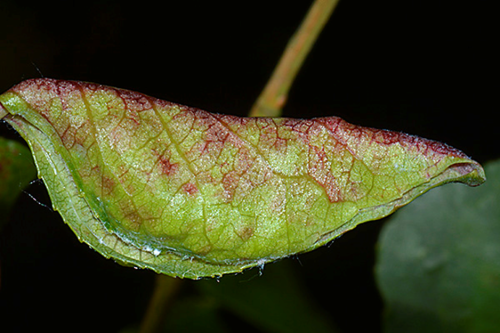 You might think that it is the aphid feeding site that causes the characteristic roll, curl or fold, but if groups of D. devecta or D. plantaginea are caged on the stem of an apple seedling, young leaves several centimetres away will develop leaf rolls characteristic of each species suggesting that they are caused by specific substances in the saliva of each aphid (Forrest & Dixon, 1975).  Aphid saliva is known to contain a huge range of proteins from amino acids to digestive enzymes (Miles, 1999) so it is highly likely that different aphid species have evolved different suites of enzymes that enable them exploit their respective host plants more efficiently.  Entomologists who work on plant galls suspect that there is something in the saliva that makes the plant’s hormones trigger the gall formation, but they freely admit that they are still just guessing.  Leaf rolls and curls are pretty tame when you come to look at the galls some aphids can induce.  Aphids from the family Pemphigidae cause structural deformations that totally enclose them and their offspring.

Not all enclosed galls are on petioles, the witch-hazel cone gall aphid (Hormaphis hamamelidis causes very distinctive galls on the leaves of its host plant. 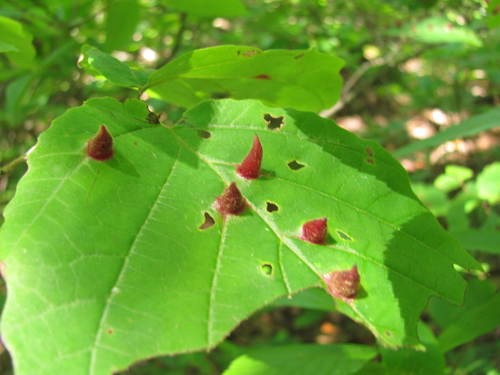 Becquaert’s non-adaptive hypothesis is and was easily and quickly dismissed (Price et al., 1987), so I will move swiftly on to the plant-protection hypothesis which Price et al., dismiss almost as swiftly.  In essence if galls are not associated with enhanced growth and survival of the galled plant then there is no protection offered.  In fact, galling insects have been used as biological control agents against weeds (e.g. Holloway & Huffaker, 1953; Gayton & Miller, 2012) which to put it mildly, does not suggest any benefits accruing from being galled.  That said, you could argue (weakly) and assuming that the plant is in control of producing the gall, that by confining the insect to a particular part of the plant it is “contained” and can be dealt with if it is causing too much damage by for example premature leaf abscission (Williams & Whitham, 1986).

The mutual benefit hypothesis is also easily dismissed as there is no evidence that galls improve the fitness of a plant as galling insects are parasites of the plant.  You might argue that fig wasps and figs mutually benefit each other, but in this case I think we are looking at special case pleading as the fig wasp are pollinators (Janzen, 1979).

So that takes us on to the adaptive value for insects hypothesis which makes a lot more sense as it is the insect (in this case the aphid), that has made the investment in what you might justifiably term, mutagenic saliva (Miles, 1999).

There is overwhelming evidence so support the nutrition hypothesis that galled leaves and galls are nutritionally superior to ungalled leaves (Llewellyn, 1982); e.g. acting as nitrogen sinks (Paclt & Hässler, 1967; Koyama et al., 2004), enhancing development and fecundity for succeeding generations of aphids (e.g. Leather & Dixon, 1981) and providing better nutrition for non-galling aphids and other insects (e.g. Forrest, 1971; Koyama et al., 2004; Diamond et al., 2008).   I also found a description of an aphid, Aphis commensalis, the waxy buckthorn aphid, which lives in the vacated galls of the psyllid Trichochermes walker, but whether this is for protection or nutritional reasons is not clear (Stroyan, 1952).

The microenvironment hypothesis which suggests that the galls provide protection from extremes in temperature and humidity was hard to support with published data when Price et al. (1987) reviewed the topic. They mainly relied on personal observations that suggested that this might be true.  I found only two references in my search (Miller et al, 2009) that supported this hypothesis, albeit one of which is for gall wasps.  I have so far only been able to find one reference that suggest galls benefit aphids, in this case protecting them from very high temperatures (Martinez, 2009).

The natural enemy protection hypothesis has been tested almost as much as the nutrition hypothesis and in general terms seems to be a non-starter as gall forming insects seem to be especially attractive to parasitoids; see Price et al., (1987) for a host of references.  Aphids, however, may be a different case, free-living aphids have many parasitoid species attacking them, but those aphids that induce closed galls are singularly parasitoid free, at least in North America (Price et al., 1987). Although this may have been from lack of looking, as parasitoids have been identified from galls of the aphid Pemphigus matsumarai in Japan (Takada et al., 2010).  Closed galls are not always entirely closed as some need holes to allow honeydew to escape and migrants to leave (Stone & Schonrogge, 2003) which can act as entry points for natural enemies, but cleverly, the aphids have soldier aphids to guard against such insect invaders.

Sometimes the potential predator can be a vertebrate.  The aphid Slavum wertheimae forms closed galls on wild pistachio trees, and are, as with many other closed gall formers, not attacked by parasitoids (Inbar et al., 2004).  Wild pistachios are, however, attractive food sources to mammalian herbivores and gall aphids being confined to a leaf, unlike free living aphids could be inadvertently eaten. The galls however, contain higher levels of terpenes than surrounding leaves and fruits and emit high levels of volatiles that deter feeding by goats and other generalist herbivores thus protecting their inhabitants (Rostás et al., 2013). Not only that, but to make sure that any likely vertebrate herbivores avoid their gall homes, they make them brightly coloured (Inbar et al., 2010).   Aphids really are great at manipulating plants.

Leaf rolls and curls on the other hand are more open structures, and in my experience, aphids that form leaf rolls or curls, are very vulnerable once a predator finds them crowded together in huge numbers.  Gall-dwelling aphids, including those that live in rolls and curls, tend, however, to be very waxy, and this may deter the less voracious predators.  I tend to support the nutritional benefit hypothesis in that with host alternating aphids, the enhanced nutrition enables rapid growth and development and is a way of building up numbers quickly, and hopefully the aphids are able to migrate to a new host, before the natural enemies find them.

Real life drama, Rhopalosiphum padi on Prunus padus at Harper Adams University May-June 2017.  In this instance the aphids won, and the plant was covered in hungry ladybird larvae eating mainly each other and the few aphids that had not managed to reach adulthood.

One thing that struck me while researching this article was that all the aphids producing galls, rolls or curls were host-alternating species. A fairly easily tested hypothesis for someone with the time to review the biology of about 5000 aphids, is that only host alternating aphids go in for galls.  This could be a retirement job J.

Becquaert, J. (1924) Galls that secrete honeydew.  A contribution to the problem as to whether galls are altruistic adaptations.  Bulletin of the Brooklyn Entomological Society, 19, 101-124.

Erwin, T.L. (1982) Tropical forests: their richness in Coleoptera and other arthropod species. The Coleopterists Bulletin, 36, 74-75.

Forrest, J.M.S. (1971) The growth of Aphis fabae as an indicator of the nutritional advantage of galling to the apple aphid Dysaphis devecta. Entomologia experimentalis et applicata, 14, 477-483.

Smith, K.M. (1920) Investigations of the nature and cause of the damage to plant tissue resulting from the feeding of capsid bugs.  Annals of Applied Biology,7, 40-55.

Smith, K.M. (1926) A comparative study of the feeding methods of certain Hemiptera and of the resulting effects upon the plant tissue, with special reference to the potato plant.  Annals of Applied Biology, 13, 109-139.