Mellow Yellow – Not all aphids live on green leaves

I have written before about aphids and how their quest for the ideal food plant may explain the evolution of host alternation; we find that most aphid species tend to be associated with rapidly growing meristems, or newly flushing leaves (Dixon, 2005). Some aphids are so keen on young plant tissue that they ‘engineer’ youth in their host plants, injecting salivary compounds and forming leaf–rolls, pseudo-galls and galls, all of which act as nutrient sinks and lengthen the time that the modified leaves stay green and nutrient-rich

Non host-alternating (autoecious) aphids, such as the sycamore aphid Drepanosiphum platanoidis, the maple aphid, Periphyllus testudinaceus, or the birch aphid, Euceraphis punctipennis, have no such escape route; they are confined to their tree host for the year, albeit, they can, if they ‘wish’, fly to another tree of the same species, but essentially they are held hostage by the their host plant. As the season progresses, leaf nutritional and physical properties change; going from young tender green leaves, with high nitrogen and water contents, to mature, tough leaves, low in nitrogen and water to yellow senescing leaves with again, higher nitrogen levels (Awmack & Leather, 2002) and finally of course, dead brown leaves of no nutritional value.

Sycamore and maple aphids, enter a state of suspended animation ‘summer aestivation’ (Essig, 1952; Dixon, 1963), whilst birch and poplar aphids, whose hosts plants often produce new growth during the year, ‘track’ these new leaves (Wratten, 1974; Gould et al., 2007). As far as these aphids are concerned young tissue is their best food source, with senescent tissue being second best and mature leaves being least favoured. During the summer they will, however, take advantage of mature leaves that are prematurely senescing, such as those attacked by leaf diseases such as tar spot. I have often found sycamore aphids feeding and reproducing on these infected leaves whilst those aphids on neighbouring mature leaves remain in aestivation.

Host-alternating (heteroecious) aphids on the other hand are somewhat different. As their life cycle includes a programmed migration back to their primary tree host in autumn, those autumn morphs (oviparae) are adapted to senescent tissue (Leather & Dixon, 1982, Kundu & Dixon, 1993, 1994). Similarly, the spring morphs (fundatrices and fundatrigeniae) are adapted to young leaves and find it difficult or impossible, to make a living on senescent leaves. 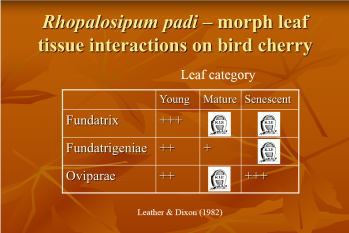 There are yet other aphids, such as the green spruce aphid Elatobium abietinum, the pine aphid, Eulachnus agilis and the black pecan aphid, Melanocallis caryaefoliae, that are senescence specialists. In contrast to the flush specialists, these aphids engineer senescence, also using salivary compounds,  and are unable to survive on young foliage (Bliss, 1973; Fisher, 1987; Cottrell et al., 2009).

Fisher, M. (1987) The effect of previously infested spruce needles on the growth of the green spruce aphid, Elatobium abietinum. Annals of Applied Biology, 111, 33-41.

A lot of what I describe comes from a talk I gave in 2009 at a workshop in Oxford on autumn colours (the output of which was Archetti, M., Döring, T.F., Hagen, S.B., Hughes, N.M., Leather, S.R., Lee, D.W., Lev-Yadun, S., Manetas, Y., Ougham, H.J., Schaberg, P.G., & Thomas, H. (2009) Unravelling the evolution of autumn colours: an interdisciplinary approach. Trends in Ecology & Evolution, 24, 166-173. I always meant to write the talk up as an Opinion piece but procrastination set in badly. I was somewhat annoyed with myself when earlier this year this excellent piece by the legendary ecologist and entomologist, Tom White, appeared; I have only myself to blame, six years is a very long bit of procrastination 😉

This post is dedicated to my eldest son, Sam, who died quietly in his sleep, at a tragically young age, December 23rd 2010.   It would have been his birthday on the 21st May.  Despite being a molecular biologist, (he worked at the Sanger Institute), he was as green as you can get, a great naturalist and conservationist, with an incredibly gentle soul. He strongly believed in conserving the World’s natural resources and amused colleagues by sticking up signs in the toilets at the Sanger, which read “If its yellow let it mellow, if its brown flush it down”.

He is sorely missed by us all. He also had more Nature papers than me 😉