Collect by all means, but….

Some of Wallace’s beetles

Leaving aside grant writing and committee meetings, which are, in theory, voluntary, the part of academic life I hate the most is marking assignments and exams.  At this time of year, however, I find myself actually enjoying marking student assignments. You may well ask why, what is it that makes these assignments different?  The reason is simple enough; many years ago, when thinking about ways in which to satisfy learning outcomes and to give our MSc students worthwhile skills in a different and enjoyable way, I had a flash of inspiration. I came up with two assignments that I felt our aspiring entomologists would appreciate and that I, and my colleagues would enjoy marking.  One is a written piece of work based on the Royal Entomological Society student essay competition. This not only gives the students the chance to write about something they like in a totally different format than their usual essays and lab reports, but as they are encouraged to submit their essays to the prize committee, they get the chance to gain a monetary reward, and many do so*.

The second assignment which I ‘borrowed’ from my own days as an entomology student, is to collect and curate a small insect collection, with the added twist of preparing a factsheet/booklet, suitable for use at outreach events, describing the collection with notes on the biology and ecology of the specimens, capped off with a fun fact for each insect. The students do a fantastic job with both the collections and the accompanying leaflets, booklets and posters (they are allowed a very free rein as to how they present the fact sheets).  They are so good in fact, that I borrow some of them to use at outreach activities**.

Some examples of the student collections.  Apologies for the lousy photographs 😊

Now on to the meat of my post. Although initially aimed at the use of live animals (by which they meant vertebrates, the three Rs of biomedical research, reduction, refinement replacement (Russell & Burch, 1959) now widely permeate society and have meant that many of the zoology practical classes that I did as an undergraduate, e.g. examining the effect of adrenaline on exposed frog hearts, or infecting scores of day-old chicks with Eimeria tenella, ready for killing (by the students) and subsequent dissection of the gut, are, and rightly so, no longer part of the student curriculum.  Although as entomologists we deplore the common perception that insects are not, for the most part, recognised as animals by funding bodies, or the general public, we are glad that this allows us to escape the dreaded ethics forms and licences to allow us to work on living material. As entomologists however, whether we work on pests or on insects of conservation interest, we are deeply in love with our study animals and although some of us (not me, I have always been an observer rather than a pinner) may own or manage large collections of insects, we do this from necessity not from a love of killing.  This is, and always has been, something of a conflict for us entomologists since the first one emerged from the undergrowth clutching a treasured specimen (Newman, 1841).

Living insects are not always amenable to transport and display; the standard fare at outreach events are stick insects, leaf insects, flower beetles and Madagascan hissing cockroaches, fulfilling the hardiness, cuteness and “yuk” factors respectively and in all cases, being large enough to see easily.  I have taken living specimens of the “World’s biggest aphid” along on many occasions, only to be greeted with responses that can only be described as of complete underwhelming disdain 😊We want and need to show the fantastic diversity of insects and the easiest way to do this is with the standard display boxes.

Boxes such as the above do not usually cause much controversy although some visitors do ask why we need to kill and pin the insects.  It is the boxes of what look like identical specimens lined out in serried rows that cause the most questioning. 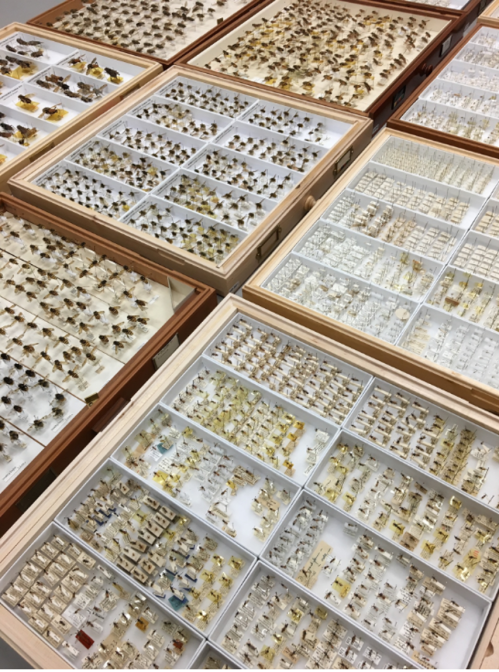 Serried rows – the infinite variety withing species – thanks to Erica McAlister from the NHM for the photograph.

My response is to ask my interlocutor to imagine that they are a 10 metre tall explorer from a distant Galaxy that has landed on Earth and collected a couple of humans, which you carefully preserve and take back to your home planet and donate them to a museum as typical Earth specimens. Now, imagine another intrepid collector arrives on Earth with the description of your specimens which unbeknownst to either of you happen to be two males from an Amazonian tribe. Alien Explorer 2 has landed in Iceland at a ladies day at a hot spring.  What is han to make of the specimens han trapped? This is usually enough to make my point and of course I also explain about the huge importance of type specimens and the advantage of being able to look and compare whole specimens from every angle, which despite the huge advances in photography and 3-D imagery is not always possible with virtual images.

Unfortunately, not everyone has had the need for collecting and the importance of reference collections explained to them by an entomologist,  and some individuals can get very worked up about what they perceive as needless cruelty or desecration of Nature, sometimes with very unfortunate outcomes. The late Philip Corbet, one of the most eminent Odonatologist of modern times, then in his early 70s, was once badly beaten up by a member of the public at a Nature Reserve to which he (Philip) had been invited to collect a rare type specimen.  Adam Hart and Sierian Sumner received a deluge of personal abuse for asking people to kill and collect wasps as part of a citizen science project and at the risk of reopening a can of worms, annelid expert Emma Sherlock from the Natural History Museum London, was hounded on-line and in the main stream media for investigating the largest ever Lumbricus terrestris, to see if it was a species new to science or a genetic aberration. 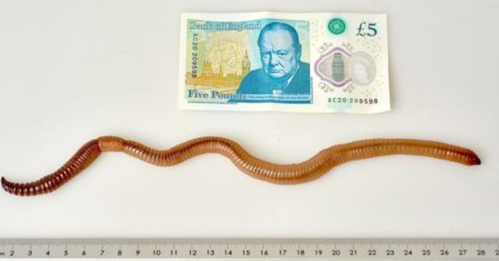 The worm in question

In Emmas’s own words, “To identify earthworms generally there are less than half I can identify accurately alive, the rest you always have to preserve to identify. For the people saying you shouldn’t preserve animals how are you ever to conserve them? You need to add a name to the animal to be able to learn more about it and to conserve it if it needs help. Like the little polychaete worm that halted the big road development a few years back. If a specimen hadn’t been taken and given a name then it is just a worm, and there are lots of worms and therefore worms are not in need of protection”.

This is also the case for many insect species, which can for example, only be identified by close examination of their genitalia, in many cases, by dissection, so certainly not possible to do with living specimens.  Another point of concern that could be raised is the phenomenon of moth trapping.  Until I went on Twitter, I hadn’t thought deeply about moth trapping.  I was involved with running one of the Rothamsted Insect Survey moth traps when I was doing my PhD at the University of East Anglia, but hadn’t realised that it was a bit of a phenomenon with even hard-core ornithologists running traps in their gardens. Given the reports of insect declines over the last couple of decades (Leather, 2018) is this something we should deplore and restrict? Very sensibly, moth trappers (moth’ers) have not ignored the problem and the consensus seems to be that moth trapping per se, pales into insignificance when compared with the other pressures on insect populations.

I suspect that like most entomologists, I have what might seem to non-entomologists a contradictory relationship with insects.  My research spans the world of conservation and crop protection.  As an ecologist, my group and I are trying to come up with ways in which to enhance and protect insect diversity and abundance.  The other members of the group are looking at better ways to protect our crops so that we can feed the world, and this inevitably involves killing pest insects to reduce their populations.  In my own garden, insects are allowed to flourish and I cringe when I see or hear people telling me how they run their fingers and thumbs along rose buds to squash the aphids.  I feel guilty if I accidentally wash a spider down the drain when I am having a shower, but have no compunction at all in squashing a mosquito or swatting a stable fly when she attempts to suck my blood!

It is precisely this conflict of interests that has made entomologists think harder about the ethics of their profession than many ‘civilians’ do when swatting mosquitoes or spraying their vegetable gardens (e.g. Fischer & Larson, 2019; Didham et al., 2019).  In the end I turned to verse 🙂

Because we love them

We need to think carefully

When we collect them

If you scroll down the RES page link you will see that our students have done remarkably well over the years.

an example followed by some of our former students 😊