Back in the 1980s I was a forest entomologist working for the UK Forestry Commission at their Northern Research Station based just outside Edinburgh.  I was working on two important pests of Lodgepole pine (Pinus contorta), the pine beauty moth, Panolis flammea and the European pine sawfly, Neodiprion sertifer.  The pine beauty moth lays its eggs in short rows on the upper surface of pine needles in late spring/early summer.

They are pale yellow when first laid and gradually darken as they mature becoming a deep violet colour just before they hatch.  The eggs of Neodiprion sertifer are also laid on the upper part of the pine needles, but are ‘injected’ just under the cuticle of the needle.  After a few days a small necrotic patch develops at the oviposition site. 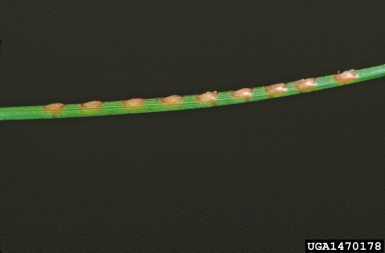 Spring field work for me was several days of rather tedious egg counting and as I scrutinised hundreds of pine needles, I noticed that some of the needles had little flecks or balls of resin on them, 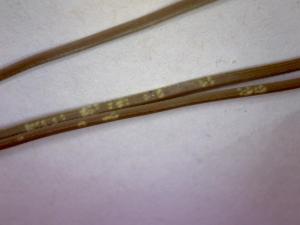 Long days working alone in a forest allow one the time to think and it occurred to me one day that if I was being fooled by these ‘pseudo eggs’ then perhaps egg-laying pine beauty moths and pine sawflies might also be getting confused and avoiding laying eggs on these apparently already infested needles.   I wondered if there was any evidence to support my far-fetched hypothesis and to my delight found a paper by (Williams & Gilbert, 1981) that demonstrated quite convincingly that passion-fruit vines, produce structures resembling eggs of Heliconius butterflies and that these deter them from laying eggs on them.

I also found papers that showed that other Lepidoptera (Rothschild & Schoonhoven, 1977; Nomakuchi et al., 2001) and beetles (Mappes & Mäkelä, 1993), are able to discriminate between leaves that already have eggs laid on them and avoid laying more eggs on those leaves, thus reducing larval completion.

Although I never formally checked it, I got the impression that needles bearing ‘egg mimics’ had fewer pine beauty moth eggs or pine sawfly eggs laid on them than those without.  Another question that could be easily looked at is whether pine trees in areas that have had outbreaks have more speckled needles than those in non-outbreak areas.  I always meant to do some formal sampling and a proper experiment to back up my feelings, but never found the time to do it.  I am pretty certain that I am unlikely to get round to doing this in the near future (if ever), but I would like to know if this is indeed another example of  a plant mimicking insect eggs.  I would be very happy indeed if any of you feel like testing my hypothesis and look forward to seeing the results in print.

Mappes. J. & Mäkelä, I. (1993)  Egg and larval load assessment and its influence on oviposition behaviour of the leaf beetle Galerucella nymphaeae.  Oecologia, 93, 38-41