In 1969, Trevor Lewis, of what was then the Rothamsted Research Station (now Rothamsted Research), published two landmark papers (Lewis 1969ab). These papers, in which he described the importance of hedges as habitats for insects (Lewis, 1969a) and in acting as possible sources of natural enemies able to colonise nearby fields (Lewis, 1969b) were to have a profound effect on me and generations of applied entomologists and pest mangers to the present day.

In 1976 the UK experienced what is now recognised as the warmest year of the 20th Century.  It was also the year that I started my final year as an undergraduate.  Before entering our final year we had to do a research placement or project.   I opted to do my project at home, I was making very good money as a temporary postman and as I usually finished my round by 10 am, I had plenty of time during the rest of the day to get to grips with my project.  I had come across the Lewis papers in lectures and thought that it would be interesting to do a similar study; given the weather I was also keen to spend as much time outside as possible 🙂 My Uncle James owned a local farm and was happy for me to sample some of his hawthorn hedges, so sampling hawthorn hedges was what I did during July and August of the glorious summer.

The intrepid student entomologist; trusty bike, clipboard and a copy of Chinery*. Note the wellington boots despite the heat 🙂

The hedges in question – three types of management

As I mentioned earlier, 1976 was the warmest year on record at the time, and I see from my report that during August I was recording temperatures in excess of 25oC, even in the hedge bottoms.

What is interesting is that although 1976 was one of the famous ladybird outbreak years (in fact last week I was interviewed by the BBC about my memories of that very same event) I didn’t record more than a handful of ladybirds in my surveys.  Perhaps inland Yorkshire just wasn’t attractive enough 🙂

Overall my results showed that over-clipping resulted in more crop pests being present and that hedges with less clipping supported a greater diversity of insect life than the more managed ones, very similar to results being reported today (e.g Amy et al., 2015).

Sadly, although Lewis’s two 1969 papers and to a certain extent his earlier paper in a much harder to access source (Lewis, 1964), led on to the concept of conservation headlands (Sotherton et al., 1989) and ‘crop islands’ (Thomas et al., 1991), which are an integral part of European Union subsidised farm payments, it was included in an influential review article (van Emden & Williams, 1974).  As pointed out recently by Terry McGlynn over at Small Pond Science, this often rings the death knell for a paper’s citation score.  As a result,  Lewis (1969b) has only been cited 91 times since 1969 and is barely remembered at all.   I remember being invited to be a facilitator at a Populations Under Pressure conference workshop on this very subject at the NERC Centre for Population Biology at Silwood Park about fifteen years ago and being surprised that none of the participants had even heard of Trevor Lewis let alone read his papers. 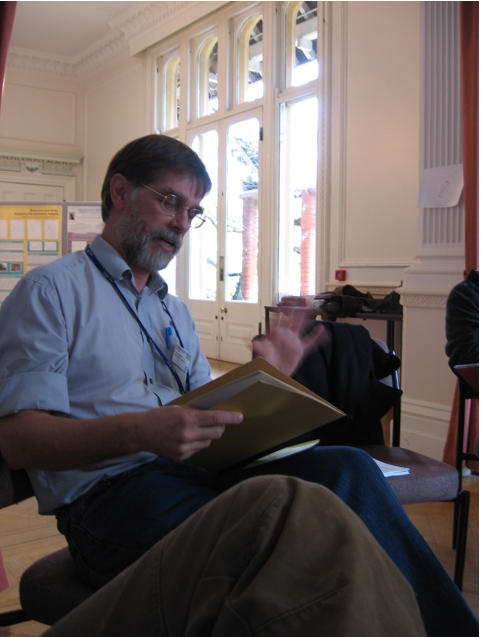 At the Populations Under Pressure conference brandishing my undergraduate hedgerow report!

The subject of hedgerow and crop edge management is still a highly important research area today, and you will be pleased to know that in the latest paper just submitted from my research group, we cite both of Trevor’s 1969 papers. Hopefully this will do something to redress the balance and bring Trevor some of the recognition that he deserves, however belated.

Chinery, M. (1973) A Field Guide to the Insects of Britain and Northern Europe.  Collins, London