This post is dedicated with thanks to Entomology Uncensored which gave me the idea for this post.

Unless you believe that the Very Hungry Caterpillar’s diet is truly representative of what a lepidopteran larva eats, you will, if asked, almost certainly answer that caterpillars eat plants and that the adults, if they do feed, do so on nectar. Although this is true for the majority of Lepidoptera, there are a couple of exceptions that have opted for a very different life style. Some of you may already now be saying to yourselves, “Aha what about the clothes moth? That doesn’t eat plants, it eats clothes doesn’t it?”, and you would be right. The larvae of Tinea pellionella, the Case Bearing Clothes Moth, are not plant eaters, they make a living eating wool, fur and feathers among other keratinous* delicacies (Cheema, 1956).

There are some moth species that have gone a step further in adopting an animal-based diet, feeding directly on living animals and not on their cast-off skins and horns. In 1879 the American entomologist John Comstock (1849-1931) while studying a colony of the cottony maple scale Pulvinaria innumerabilis, was one day surprised to find a caterpillar busily eating his study organisms.  Rather than losing his temper and killing the caterpillar, he reared it through to adulthood and realised that this was a species new to science, which he named Dakruma coccidivora (Constock, 1979), now renamed Laetilia coccidivora and recognised as a useful biological control agent (e.g. Goeden et al., 1967; Mifsud, 1997; Cruz-Rodriguez et al., 2016).  Perhaps it had evaded being spotted by less keen-eyed entomologists from its habit of living underneath the scale insects it eats (Howard, 1895). 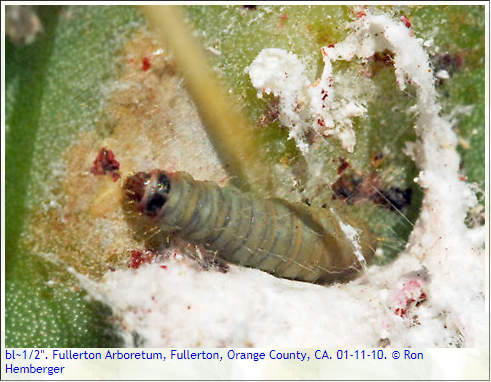 Less deadly to its host, but no less of a carnivore, is the moth Epipomponia nawai.  This, and all the other members of its family, thirty-two in total, are all ectoparasites of Hemiptera, especially cicadas and planthoppers (Jeon et al., 2002).  The larvae attach themselves to the abdomen of their host and feed on the juicy flesh underneath the cuticle.  Once ready to pupate they spin a silk thread, drop off their host and spin a cocoon on the bark of the tree their host has fed on (Liu et al., 2018).  The adults do not fed and only live long enough to mate and lay eggs.  For those of you who love a mystery, no-one knows how the moth larvae find their cicada hosts. One possibility is that they might use the cicada song as a cue but this has, so far, not been proven (Liu et al., 2018).

An even more striking example of predatory behaviour in moth larvae is that shown by members of an otherwise herbivorous Genus of Geometrid (looper) moths, Eupithecia.  The Eupithecia have a worldwide distribution, but in Hawaii, all but two of the species are ambush predators Montgomery, 1983).  The caterpillars show typical looper behaviour, remaining motionless pretending to be a twig or leaf, depending on their colour.  When a potential prey item bumps into the back of the caterpillar it rears backwards and catches the victim between its elongated and spiny thoracic legs and then chomps happily on its juicy meal.  It is thought that the absence of praying mantises on the Hawaiian Islands allowed the ancestors of the original Eupithecia that colonised the islands to fill their empty niche (Montgomery, 1983; Mironov, 2014).  The caterpillars are not fussy about what they eat, as long as they can grab and keep hold of it and it doesn’t fight back.  They have been recorded as eating flies, braconid wasps, leafhoppers, other Lepidopteran larvae, crickets and even spiders and ants (Montgomery, 1983, Sugiura, 2010).

Last in my list of carnivorous Lepidoptera and perhaps the most surprising are the Vampire Moths.  The phenomenon of “puddling” by butterflies to obtain sodium is well-known (e.g. Boggs & Jackson, 1991) and can be a very attractive sight.

Somewhat less attractive behaviour is seen in a number of moth species from the Noctuid, Geometrid and Pyralid families which satisfy their desire for Sodium by feeding as adults from the tears and pus of mammals, including humans (Bänziger & Büttiker, 1969).

The Noctuid moth Lobocraspis griseifusa sucking lachrymal fluid (tears) from a human’s eye.  The author, whose eye this is, rather gruesomely asks us to “note the deep penetration of the proboscis between eye and eye lid” Bänziger & Büttiker (1969).

Some Noctuid moths have taken this a step further, perhaps a step too far. Moths of the Genus Calyptra, have very strong proboscises which allow them to feed through the skin of fruit, even oranges, hence their common name, fruit-piecing moths.  A few species however, have adopted a somewhat more interesting diet and have developed a taste for fresh mammalian blood, again, including that of humans, which they suck directly from their victims (Bänziger, 1968).  They are, of course, known as the Vampire Moths!

One response to “Meat eating moths”