Just a brief thought this week, mainly about shifting baselines and changing perceptions.  I attended the launch of the State of Britain’s Larger Moth’s Report   http://www.mothscount.org/uploads/State%20of%20Britain’s%20Larger%20Moths%202013%20report.pdf last week (February 1st) which as well as giving me the chance to catch up with a number of old friends, also enabled me to hear Chris Packham http://www.chrispackham.co.uk/  giving a lively and very entertaining talk about why moths are important and how he got hooked by ‘natural history’.  He cited as one of the main factors,  his childhood experiences of rearing (or attempting to rear) woolly bear caterpillars, the larvae of the Garden Tiger moth Arctia caja,  a widespread and common species when I was a child and teenager in the 1960s and early 1970s. 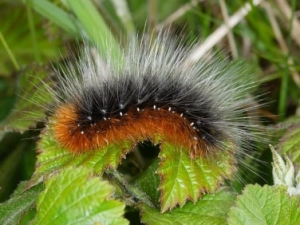 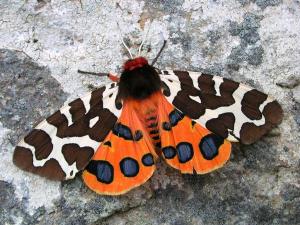 When I was earning extra money working as a postman in the Vale of York during my student years, it was one of the insects that I could guarantee I would encounter on my round.   Despite its wide range and great abundance, this moth has suffered a huge decline in numbers and I have hardly seen one since I was a long-haired, flares wearing student.  Like Chris Packham, it was the opportunity to interact with such a striking insect, which kept me interested in the natural world despite the competing interests of girls and beer.  As I write, I am teaching on a module (Ecological Entomology) of our MSc Entomology course http://www.harper-adams.ac.uk/postgraduate/201004/entomology (incidentally the only one in the UK).  Having been reminded of the Garden Tiger by Chris Packham, I quickly substituted my population simulation modelling exercise on the Speckled Wood Butterfly, with one on the Garden Tiger.  After I had finished introducing the subject to the students, Kevin, a mature student said that it was collecting and rearing woolly bear caterpillars as a child that had led to him to be sitting in front of me now.  One of the other students, a recent graduate, piped up and asked “what is a woolly bear?  I have never heard of them”.   He was there because he had been inspired by his project supervisor.

I guess the point that I am trying to make, is that whilst Kevin and I were inspired to become entomologists by our childhood experiences, Craig had to wait until he was exposed to the wonder and awe of working with insects as an undergraduate.  So what’s the problem you may ask?  Both students have ended up in my class. There is a problem however; the last BSc in Entomology in the UK stopped running in 1995, there are no Entomology Departments in UK universities , there are as far as I can ascertain, very few academic entomologists who describe themselves as entomologists in their job title e.g. as Professor of Entomology.  As far as I know, there is only me, http://www.harper-adams.ac.uk/staff/profile.cfm?id=201220 and then there is Francis Ratnieks at Sussex who proudly describes himself as the UK’s only Professor of Apiculture http://www.sussex.ac.uk/profiles/128567.  Others who I regard as mainstream entomologists are not described as such as in their job titles, e.g. Richard Wall at Bristol, Professor of Zoology; Jane Memmott also at Bristol,  Professor of Ecology; Bill Hughes at Sussex , Professor of Evolutionary Biology; Charles Godfray at Oxford (Hope Professor of Zoology) and the list goes on.  Even Mike Siva-Jothy who describes himself as an angry old entomologist on Twitter is just listed as Professor. Unlike arachnologists in Canada who are extremely rare organisms as outlined in Chris Buddles’ great blog article http://arthropodecology.com/2013/02/06/where-are-all-the-arachnologists-and-why-you-should-care/  we are still around in fairly respectable numbers.  We do, however, seem to be making it difficult for potential students to find and identify us.  The reasons for why I think this has happened will be the subject of another blog.  The point is, that if we are hard to find and identify, then the pool of potential future entomologists is going to become smaller as fewer and fewer undergraduates are exposed to basic entomological teaching and thus fewer and fewer entomologists will make it through to academia and our profile will become even lower and therefore even fewer students will be able to be inspired and so on and so on.  As a result, we too are likely to become as endangered as Canadian arachnologists.

So, if you are an academic who works mainly with insects and you are able to identify more species than just those you work on, then why not identify yourself in your job title as an entomologist and stand tall and proud and countable.

2 responses to “Where have all the woolly bears gone? Woolly bears what are they?”