Last week (April 22nd and 23rd 2015) I had the pleasure of attending the Institute of Chartered Foresters’  National Conference in Cardiff.  The theme of the conference was Tree health, resilience and sustainability.

The PowerPoint versions of the presentations are available here.

It was very well attended with over 150 delegates and divided into six sessions; Setting the Scene, Overseas Experience, Perspectives on Risk, Searching for Resilience and Sustainability, Practical Responses in the Field and finally Messages for Government and the Profession.  The speakers came from a range of backgrounds; universities, research institutes, the forest industry and others.  Dr John Gibbs, a former colleague of mine from Forest Research opened the formal talks with a masterly review of how forest health problems were tackled in the last century, using Dutch Elm Disease as his focal organism. He was followed by Professor James Brown from the John Innes Institute discussing how lessons from agriculture could be used to develop strategies to combat tree diseases.  Both these speakers pointed out that there was a grave shortage of forest pathologists and entomologists in the UK, particularly in the university sector.   James Brown commented that he had been shocked to discover he had only been able to count seven people in the sector working on tree diseases and added that this did not make them forest pathologists.  We had talks from overseas speakers such as Professor Mike Wingfield from South Africa on global forest health threats, Jim Zwack from the USA speaking on the Emerald Ash Borer as an urban pest problem and Catherine St-Marie highlighting the fact that climate change was aiding and abetting the spread of the Mountain Pine Beetle in Canada.

There was a surprisingly interesting talk on the problems of insuring forests against pests and disease form Phil Cottle of Pardus Underwriting Limited and an enlightening presentation from Professor David Ball from Middlesex University talking about uncertainty and decision-making.  Again both these speakers highlighted the need for further information about pests and diseases.

Day 2 had us searching for resilience and sustainability within the UK forestry sector with a very entertaining talk from Jo O’Hara, Head of Forestry Commission Scotland.  Her talk really drove home to me how much UK forestry has changed over the last 30 years; when I joined the Forestry Commission in 1982 they had only just appointed their first woman District Officer, and now a woman runs FC Scotland – a very welcome sign of change.  Tariq Butt from Swansea University spoke about the use of entomopahogenic fungi as biological control agents in forestry, something increasingly moving higher on the agenda as we face the loss of even more conventional pesticides in the next few years and Martin Ward, the Director-General of EPPO asked us to consider how global plant health arrangements could be improved to protect trees more effectively.  Again the message was that we need more forest health specialist, and not just in the UK.   After the morning coffee break, Joan Webber, the Principal Pathologist for Forest Research UK, spoke about detection and precautionary measures to combat biosecurity threats and yet again highlighted the need for further research and eyes on the ground; in other words more specialist staff are required.  Neil Strong from Network Rail drew our attention to the problems caused by trees to our railway system and then Bill Mason extolled the virtues of increasing species and structural diversity when planting new forests and managing older ones, to improve resilience.

The afternoon session kicked off with Clive Potter from Imperial College talking about understanding what the public’s concerns about tree health are and how certain events can amplify risk perception among the public.  The public outcry about Chalara and Ash Dieback being a particularly good example of the phenomenon.  I followed with a talk about the needs for professional education which gave me the opportunity to point out what subject areas should be covered in an aspiring forester’s education.

I was also able to remind my audience that the number of UK universities providing specific forestry training at undergraduate level had dwindled to less than a handful and that despite offering modules purporting to cover forest health problems, only two employ specialist staff in those areas.  At postgraduate level there is only one course that deals specifically with forest health issues in the UK, the MSc in Conservation & Forest Protection that I run at Harper Adams University.

My take-home messages to a very receptive audience was that students need more emphasis on identification skills and much more practical experience, that current forestry professionals need to keep their eyes open and practice looking for pests and diseases as well as taking any opportunity to refresh their training and that UK universities offering forestry related courses need to employ more forest entomologists and forest pathologists.  Even more importantly, the UK government need to make sure that there are financial incentives to encourage universities to employ more forest entomologists and forest pathologists by increasing targeted research funding in those areas and once increased, maintain those levels of funding.  There also needs to be a clear signposting of career opportunities for the next generation of forest health scientists and if we as a country are serious about safeguarding our native woodlands and forest estate, then more jobs need to be created.

As I have written elsewhere, we cannot afford to sit back and hope that things will get better on their own.  Versions of this slide appeared on the screen several times during the course of the conference.  We are under attack and we need more suitably qualified people to help repel and contain the invaders. 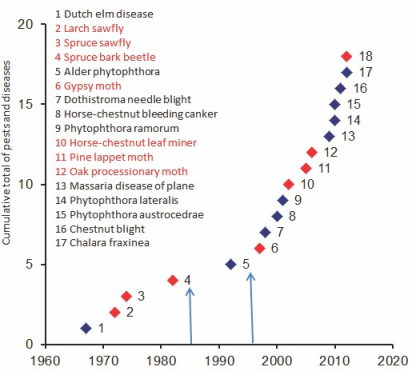 Leather, S.R. (2014) How prepared is the UK to combat future and current threats to forests? Commonwealth Forestry Association Newsletter, 64, 10-11.

I am very grateful indeed to the Institute of Chartered Foresters for giving me the opportunity to speak at the conference and for providing generous hospitality.  It was one of the most engaging and interesting conferences that I have been to for a very long time.  Well done ICF.

It was also good to see Twitter being used very successfully with the #Treehealth hashtag.  We even had participants from the Canadian Forestry Service!