In 1924, Norman McIndoo (1881-1956) an entomologist based at the Fruit Insect Investigation Department in the USDA Bureau of Entomology in Washington DC was instructed by his boss Dr. A.L. Quaintance, to make a study of insect repellents and attractants.   After two years of frustrated experimentation McIndoo invented a piece of apparatus that would revolutionise the study of insect behaviour, the Y-tube olfactometer (McIndoo, 1926) . He freely admitted in his paper that he had borrowed the name from the Zwaademaker olfactometer (Zwaademaker, 1889) a device used to test the sense of smell in humans.  As you can see however, his apparatus bore no resemblance to that of Zwaademaker.

McIndoo ‘s apparatus was first used to find out whether Colorado potato beetles (Leptinotarsa decemlineata) responded to the odour of the potato plants. The beetles were placed in a dark bottle in a light-tight box, the bottle being attached to the stem of the Y-tube by a tube through which the beetles were able to move, at first being attracted to the light. Once they reached the junction of the Y they then had to make a choice between the two forks this time using their sense of smell. A pump was used to draw air from the two forks, one of which was connected to a jar containing a potato plant, the other which held the control substance. In theory, once at the fork the beetles were confronted with two streams of air, one smelling of potato, the other being odourless. McIndoo was indeed able to show that about 70% of the beetles responded positively to the odour produced by the potatoes. He also showed that the beetles responded to extracts made from the foliage of a number of different host plants.  He briefly mentions in the paper that the beetles were able to tell the opposite sex by smell and that the males would follow sexually mature females. He had accidentally discovered insect sex pheromones but did not realise it at the time. In the last part of his paper he provides data showing that other insect species, including Lepidoptera, were also able to respond to host plant odours.  The Y-tube olfactometer and the closely related T-tube olfactometers soon became the accepted way to test insect response to odours and are widely used in laboratories around the world to this day, for example http://weslaco.tamu.edu/research-programs/entomology/subtropical/behavior/ and http://sciencebykathy.wordpress.com/

They do however have some limitations; there is a tendency for turbulence to occur at the junction of the Y- and T-tubes which means that there is some mixing of the test odours and this means that there is not a clearly delineated odour field into which the insects can enter, leave and re-enter if they so wish. In 1970, Jan Pettersson from the Swedish University of Agricultural Sciences at Uppsala, invented the four-way olfactometer with which to test the existence of a sex pheromone in the aphid Schizaphis borealis (Pettersson, 1970). 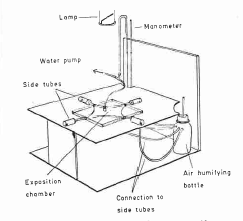 The four-way olfactometer provides a neutral central zone which is surrounded by four very distinct odour boundaries which the test insects can enter, sample the odour and then either stay or leave and move into another area of the apparatus. Louise Vet and colleagues (Vet et al., 1983) from the University of Leiden added some modifications to the original Pettersson version, with which to study the behaviour of aphids and their parasitoids. 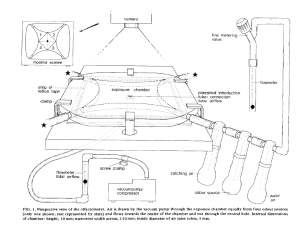 The four-way olfactometer, whether a Pettersson or Vet version, or a modification of the two, is now regarded as the ‘gold’ standard and is used very widely around the world.

It is certainly our research group’s favoured version and we use it for testing the responses of aphids, hymenopteran parasitoids, lepidoptera and beetles to a range of odours (Trewhella et al., 1997; Leahy et al., 2007; Pope et al., 2012). We are currently using mini-versions to test the olfactory responses of predatory mites. Watch this space.