Aphids that live in temperate or boreal regions have to be able to survive overwinter. Aphids, depending on species, are able to pass winter in two ways. If they are holocyclic i.e. possess an egg-laying stage, they usually overwinter as eggs. Aphid eggs are extremely cold-hardy; they have been reported to have super-cooling points of about -42oC (Somme ). If laid on a woody host, eggs are usually laid in the bud axils as in the case of the apple aphid, Aphis pomi, the black bean aphid Aphis fabae and the bird cherry aphid, Rhopaloishum padi.

In some instances, such as the sycamore aphid, Drepanosiphum platanoidis, eggs are laid directly on the tree bark or in crevices in the bark or even in lichen growing on the bark.  See if you can spot the eggs in the picture below. 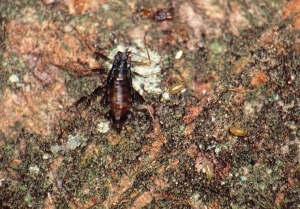 If however, the aphid in question lives on an herbaceous host, the eggs may be laid directly on the ground, on or amongst fallen leaves or at the base of grass tussock.

The other strategy adopted by those aphids that are anholocyclic, such as the green spruce aphid, Elatobium abietinum, is to pass the winter as an active stage, either as an adult or immature nymph. Those holocyclic aphids that have anholcyclic strains are also able to adopt this strategy. Despite their soft bodies and fragile appearance, aphids have quite low super-cooling points values such as -26oC having been reported (Griffiths & Wratten, 1979).

A potential advantage of using an active overwintering stage and not an egg, is that if they survive the winter, they are able to start reproducing sooner, particularly if they are a host –alternating aphid, where the aphids hatching from eggs, have to spend time developing and reproducing on the primary woody host before being able to migrate to the secondary hosts. This also applies, to a lesser extent, to those holoyclic aphids living on herbaceous plants, although the temporal advantage is not as great. One would assume that given the relative cold-hardiness attributes of aphid eggs and adults that in a country such as the UK where winter temperatures below -10oC are both infrequent and short lasting, winter survival of aphids would be extremely high if not guaranteed. This is not the case. For example, eggs mortality of the bird cherry aphids is typically around 70-80% as shown in my first ever publication (no fancy graphics packages in those days, just Letraset , Indian ink, stencils and tracing paper). Actually people had measured aphid egg mortality much earlier than this (Gillette, 1908) but I was the first person to monitor mortality throughout the winter and show that it occurred at a steady rate irrespective of the severity of the winter.

It is actually a function of the length of the winter that determines how many eggs survive, the longer the winter the greater the mortality. 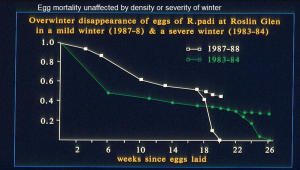 This level of mortality is typical for all aphid species for which I have data (Leather, 1993). Some of this mortality can be attributed to predation, but most of it is intrinsic (Leather, 1981), possibly due to cryo-injury.

Similarly, those aphids that overwinter as adults or nymphs, despite their ability to super-cool to temperatures below -20oC, experience even greater levels of mortality as shown elegantly by Jon Knight and Jeff Bale in 1986 studying overwinter survival of the grain aphid Sitobion avenae near Leeds.

In fact one wonders how any aphids at all survive winter this way, but they certainly do if the winters are mild enough, as in the case of Myzus persicae and Sitobion avenae in southern England and E. abietinum throughout most of its range (Day et al., 2010). An interesting anomaly is Iceland where hot springs abound and the bird cherry aphid is able to survive anholocyclically on grasses growing around the springs whereas in other countries with similar winter temperatures it would only be able to survive as the egg stage.

Despite the importance of winter to aphid population dynamics we still know very little about their winter ecology, our knowledge being confined to a handful of economically important species. Despite the discomfort of field work in the winter this is an area which would be very rewarding to anyone in need of an interesting and good research project.  Finger-less mittens are, however, definitely recommended 😉